Characteristics and Uses of Flumazenil 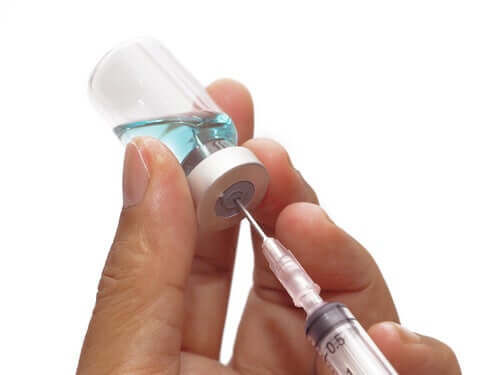 Flumazenil is a drug used for the treatment of benzodiazepine intoxication. Actually, it’s the only one available for this purpose and available in 5 and 10 ml vials. The concentration of their active ingredient is 0.1 mg/ml.

These drugs were introduced into the market as early as the 1960s. Since then, their use has increased considerably due to their anxiolytic, hypnotic, and sedative actions.

In parallel to their increasing use, there are many reports of intoxications due to their misuse. However, their clinical picture varies depending on the type of benzodiazepine administered.

When intoxication happens and depending on the absorbed dose, this medication triggers a decrease in the level of consciousness that produces a series of symptoms, such as:

How does flumazenil exert its effect on the organism?

This drug owes its effectiveness in the treatment of intoxications with benzodiazepines to its capacity to block the receptors of these drugs at a central level. Specifically, it acts through a competitive inhibitory mechanism at the level of the brain receptors of benzodiazepines.

Furthermore, this drug is a GABA antagonist as it binds to the GABA receptor complex at the specific binding site of benzodiazepines. This is where flumazenil competes with the benzodiazepines — to bind to the receptor.

The effects of the antidote are usually dissipated before those of the toxic drug because the binding is competitive. Also, because flumazenil has a much shorter duration than most benzodiazepines.

Notwithstanding, this drug doesn’t reverse the effects of barbiturate drugs, opiates, or tricyclic antidepressants.

Find out All About Anxiolytics or Anxiety Medications

The effect of flumazenil in the body

Pharmacokinetics covers the processes of absorption, distribution, metabolism, and elimination of the administration of a drug. In this respect, flumazenil is a hospital drug and its mode of administration is intravenous. This is because it undergoes a strong first-pass metabolism by the oral route.

Then, it reaches the brain rapidly and begins its action after approximately 1 to 2 minutes after the intravenous administration. In addition, 50% of it binds to plasma proteins for distribution.

This is when it metabolizes in the liver. Consequently, patients with liver disorders should modify the dose of flumazenil. Mainly because most of it goes out with the urine after metabolization — although a small part goes out with fecal waste.

Like all drugs on the market, flumazenil isn’t exempt from producing a series of side effects.

In this respect, agitation was the most frequently reported side effect in the studies conducted with this drug. In such cases, doctors had to suspend treatment.

Also, please take into account that its use in people undergoing chronic treatment with benzodiazepines may lead to an abrupt withdrawal syndrome that involves convulsions. This is typical of flumazenil though.

In addition, the use of this drug isn’t recommended in patients under 18 years of age, pregnant women (unless the mother’s life is in danger), patients with coronary artery disease, and with a known allergy to benzodiazepines, or people addicted to this substance.

Here’s Your Guide to Anti-Anxiety Medications

Flumazenil is the only antidote available for benzodiazepine poisoning. It competes with benzodiazepines to bind to receptors in the central nervous system, block them, and thus reverse the effects of benzodiazepines.

Its use is only in a hospital setting and its mode of administration intravenous. Finally, we recommend always following medical indications and never skipping the administration guidelines if you’re undergoing benzodiazepine treatment. This is because it could put your health at risk.

Descriptions, Characteristics and Uses of Clorazepate
Clorazepate is sold under the brand name of Tranxene, and Tranxilium among others. Its active ingredient is dipotassium clorazepate. Read more »
Link copied!
Interesting Articles
Medication
4 Types of Injections You Should Know About