6 Types of Risky Fish that You Should Never Eat

There are certain fish that have a high fat content which allows mercury to accumulate, turning it into a dangerous food for our health. 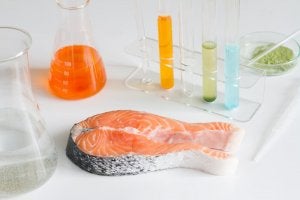 Fish is one of most healthiest and most delicious foods in the world, making it a logical addition to our regular diet. It’s even often a link to good health, which gives more than enough reason to doctors and nutritionists to consider it as a recommended food source.

However, there are many negative things linked to fish of which most people are unaware; one of them is mercury.

Over the years, there have been different studies confirming the presence of heavy metals in fish. Among those heavy metals, methylmercury is a big one (an organic compound that derives from mercury).

It’s a considerably dangerous component for humans when we eat fish containing high levels of it.

However, mercury isn’t the only thing that can affect human health. There is also another harmful agent present in fish fat. They’re pollution elements that come from the fish’s environment.

Objects such as plastic, or strong chemical elements, are responsible for contaminating the fish that end up on the table as a “healthy” dinner.

Furthermore, the human body can’t process elements like mercury. The metal builds up until it reaches levels that are dangerous for the body. This makes certain fish risky to eat.

Risky fish you should avoid eating

Knowing that certain types of poisonous fish exist, we should also know which are the types that mercury affects most. We listed the riskiest fish below.

Red tuna is one of the most popular types of fish in the fishing industry and there are various different species. Considering the dangers of mercury, people shouldn’t eat red tuna regularly.

This warning is especially geared towards children and pregnant women. We should eat this fish a maximum of once a week.

Visit this article: 14 Remedies for Removing Heavy Metals from the Liver

On the list of the world’s riskiest fish, we’ll find the basa. It comes from Vietnam and it’s gained popularity with diners because it’s easy to eat.

Because it has no bones, it can be eaten effortlessly. Similar to a flounder, you can also eat it as a fillet. However, the basa is more economical. Despite the ease and price, it lacks in nutrition. For starters, basa is low on omega-3 fatty acids.

Furthermore, a pesticide called trifluralin contaminates most basa. It’s a substance that can be harmful to human health.

This fish is one of the most common finds in Spanish cuisine. It’s even used as a lower-cost alternative for swordfish. However, its large size presents a big disadvantage.

Due to its size, the fat ends up accumulating cadmium (a harmful metal) and mercury. Both metals don’t have many health benefits to offer, so avoiding this risky fish is the best option.

Many places have mackerel regularly, especially in restaurants. Despite their popular consumption, the World Health Organization (WHO) declares it as a dangerous food.

This risky fish contains one of the highest quantities of mercury in its meat. Keeping that in mind, the smartest thing is to avoid mackerel, or at the very least, having it only from time to time.

If the previous fish is common (mackerel), then what can we say about tilapia? It’s no doubt one of the most popular fish on all the levels of fishing, commercial and consumption.

Despite how common it is, it also might be one of the riskiest fish for human health. It gets worse, tilapia is even comparable to lard because of its high-fat content. It leads to high cholesterol (LDL), or in other words “bad cholesterol”.

Keeping this in mind, you should aim to eat less tilapia, especially if you have arthritis, asthma, or cardiac diseases.

Taking advantage of its bigger size, the swordfish feed on other smaller fish throughout its lifetime. As a result, it stores large quantities of fat, which could also store high levels of mercury.

Considering those high levels, you’re better off avoiding eating swordfish and keeping it off the menu definitively.

How to Cook Vegetables That Taste Delicious Every Time
Creativity and knowledge: now that's a recipe for making appetizing, tasty vegetables. Not sure how to cook vegetables that actually taste as great as they make you feel? Don't worry. There are endless options for serving vegetables, too.  Read more »
Link copied!
Interesting Articles
Did you know?
World Blood Donor Day Helps Save Lives