Ten Traits that Toxic Parents Have

There are many types of toxic parents. Some are too permissive, while others are excessively strict. But what's the middle ground? How can you know if you're a toxic parent? 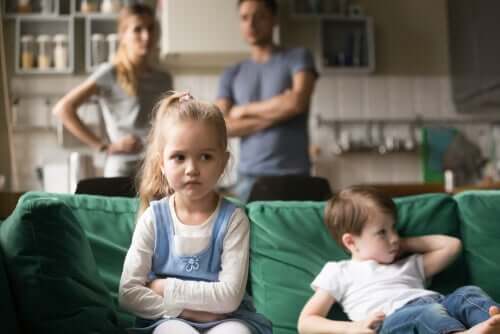 Toxic parents don’t know their behavior is harming their child instead of benefiting them. In their desire to be good parents, they make serious mistakes.

It’s important to note that toxic behaviors aren’t only related to violence or physical abuse. On a psychological level, some harmful behaviors can interfere in the life of any child or teen.

The main traits of toxic parents

1. “I use manipulation to get what I want”

Are you a manipulative parent? While it may seem hard to believe, there are some parents who use their children to manipulate others into getting what they want or simply to feel that they’re right, even if it isn’t appropriate.

Even though you may think that you child isn’t aware, the truth is that this behavior can be perceived. And it can also cause deep, emotional wounds that will affect them in the future.

The most common trait of toxic parents are victimhood and guilt. Instead of scolding their child when they do something wrong or talking to them about it, they play the victim and generate a great sense of guilt in them.

In fact, many times, the child ends up accepting responsibility for situations and behaviors that they haven’t even caused.

These types of toxic parents unleash insults and hurtful words to “educate” their child. They mistakenly believe that this will make their child learn faster.

However, this behavior not only damages children’s self-esteem. It’s also counterproductive. The best way to get them moving forward is by showing support and trust.

They should know that their parents trust them and that they have positive expectations about their behaviors, as this will make them believe in themselves. The latter is known as the Pygmalion effect.

Don’t miss:  I Was in a Toxic, Damaging Relationship Too

Lack of affection can lead to affective disorders later on, leading to emotional dependence.

In addition, this toxic behavior generates mistrust and serious difficulties with interpersonal relations that will persist long into their future.

Affection is so important. We shouldn’t just assume that our child knows they’re loved, we need to also show them love, care, and respect. This way, the child will grow up happy and healthy.

Lack of communication generates distrust and prevents the child from expressing their emotions. Often, toxic parents don’t tend to worry about this aspect; they think it isn’t important in their children.

Listening to children’s ravings may not be fun, especially when you’re having a stressful day. However, you have to pay attention to what they say to know how they feel and validate their emotions.

If they’re telling you about it, it’s because they believe they can vent. Therefore, you have to show them that you’re available to them and that you care about what they say.

You can’t completely control your children’s relationships. It’s normal to be concerned if they play with or date people who don’t seem right, but these opinions are often based on prejudice.

Children must be educated to have an authentic personality. Strengthening their self-esteem and self-confidence is essential. This will make it much easier for them not to surround themselves with bad company.

Forbidding them to see your friends can be, in addition to painful and traumatic, a long-term problem. After a certain age, they have to learn to make mistakes.

Some parents expect too much of their children. It’s normal to want them to be successful, to be the best in their class, or to have lots of friends. But none of this matters if the child is unhappy.

A child is an autonomous individual and has to find out what they want for themselves. It’s convenient to support and guide them but never pressure them to be someone different according to a series of expectations.

This will only cause them frustration, stress, and the disapproval of their family. Let them be who they want to be.

One of the biggest problems toxic parents face is trying to teach their children good behaviors when they don’t practice them themselves.

Inconsistency only generates misunderstandings and grudges. It isn’t logical to prohibit something from your children and for them to discover, for example, that you do it secretly.

Not only will it cause disappointment in them, but they’ll lose respect for you.

Some toxic parents are really demanding. Remember the kid in school who cried because they didn’t get an A+, while you were happy to get a C?

Parents need to examine their expectations. Yes, an A+ is better than an A, of course. But don’t lead your child into thinking that they’re useless if they don’t get that grade.

Many factors can influence their grade in a subject. It’s not the end of the world if you get a lower grade or even fail. It’s about learning, not competing.

Being overprotective is one of the worst behaviors parents can have. This prevents children from learning to make decisions and deal with consequences on their own.

It’s not okay to keep your child in a protective bubble where no one can hurt them. After all, life teaches its lessons through falls and mistakes. They have to learn to make mistakes and face their decisions. Overprotecting them only hinders their maturity.

Teaching children unhealthy habits isn’t positive. Letting them drink alcohol from an early age, smoke, or engage in other unhealthy practices doesn’t make you a better parent but rather an irresponsible parent.

You can’t be friends with a child, no matter how much you want to. You have to be by their side and make them consider you pillars to lean on. But that doesn’t mean you have to spoil them.

What if I’m a toxic parent?

Toxic parents are very negative for their children but, above all, for themselves. Usually, they tend to focus their frustrations on their offspring, without even realizing it.

It’s important to identify if you have certain toxic behaviors. If so, you could be hurting your children a lot, as well as affecting their personal growth.

Review your attitudes and ask for help, if you consider it necessary. It’s never too late to change!

“Rich Kid Syndrome”: A Mindset that Results from Parenting
The rich kid syndrome is also known as "affluenza" and it doesn't refer to kids of the wealthy. It has to do with giving children everything that they ask for without requiring them to do anything for it; it's a situation that generally occurs in high-income families.  Read more »
Link copied!
Interesting Articles
Health and sexuality
What Happens if I Vomit After Taking My Birth Control Pill?