Why the Flu Spreads More in the Winter

The flu is a viral disease caused by different types of influenza viruses. In general, cases of infection tend to increase during the winter. Here, we'll tell you why the flu spreads more in the winter. 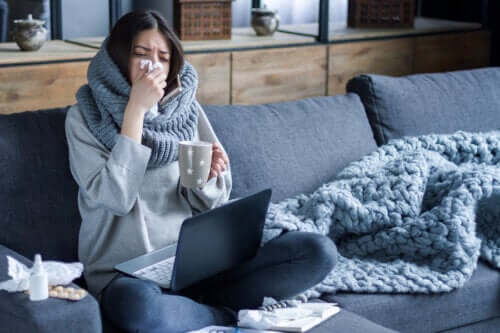 Nowadays, COVID-19 has monopolized worldwide media and research. Even so, other viruses still circulate that, although less dangerous, cause exceptionally severe symptoms and discomfort. This is the case with the flu, a disease that often spreads during the winter.

You may be wondering why the flu has its peak prevalence in autumn and winter and practically disappears in spring. In this article, we’ll answer this question.

The flu is an infectious disease caused by different types of influenza viruses. They’re single-stranded RNA viruses, which are covered by an outer lipid layer that gives them their characteristic rounded appearance. According to the World Health Organization, there are four types of seasonal influenza viruses:

The global incidence is estimated at 20%. In other words, 20% of the world’s population suffers from it at some point in their lives. Furthermore, it’s a selective pathology, since it can affect up to 50% of certain population groups.

Due to its epidemiological importance, influenza has been the subject of multiple studies.

This article may also interest you: 6 Habits that Can Help You Recover from the Flu

The flu and the weather

A study published in the scientific journal Plos Pathogens explains the relationship between influenza and climate factors and why the flu spreads during the winter:

It seems that this study concludes that low temperatures and dryness promote the spread of the virus.

Various hypotheses try to explain why low relative humidity favors the spread of the flu:

The flu spreads with low temperatures

In this case, the explanation may be a little simpler.

At low temperatures, the nasal mucous membranes cool down when they breathe in air. This creates a microenvironment that’s more conducive to the virus, which could replicate better. As a result, this translates into a higher viral load with each sneeze and spray, thus promoting transmission.

Read this article to learn more: What to Include in Your Diet When You Have the Flu

There’s a reason for the flu season

In short, influenza seasonality makes clear scientific sense. In the northern hemisphere, this virus begins to spread in October, reaching its peak between December and February. These data perfectly agree with what the researchers concluded during the study since those months are cold and dry.

Fortunately, there’s an annual flu vaccine, so its potential problem is almost nullified. This vaccine is highly recommended for the elderly and immune-suppressed.