Why Eating Bread Isn't Good For You

Consuming white bread can be as harmful as excess sugar, so if you don't want to stop eating it, you should opt for healthier alternatives. 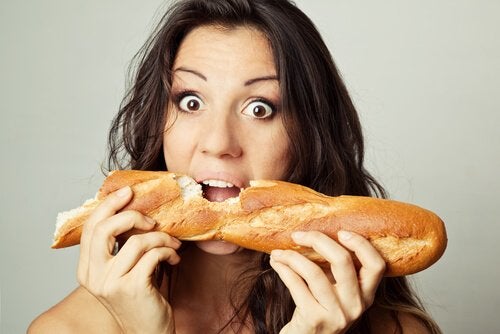 In recent years, warnings about regular bread consumption have increased. Although eating bread has been part of the human diet since ancient times, today there are many reasons to avoid it.

The basic recipe is made with refined wheat flour, water and salt; This, added to the preservatives added by some industries, does not make it the best option at a nutritional level.

In fact, due to its high carbohydrate content, it is not recommended as part of our diet, especially if our goal is to lose weight. Eating bread every day can make you overweight and can cause other metabolic diseases.

Are there more reasons to limit bread consumption? Of course! While it may be harmless to eat it in small portions, excessive bread consumption can cause several negative reactions in the body.

Bread and its low nutritional quality

Bread, especially the industrial white kind, is not a nutritious food. During the refining process it undergoes, it loses many of its properties, since the wheat germ and the bran are removed.

The result is a product with a low level of fiber, vitamins and minerals that, due to its high concentration of starch, can hinder digestion and metabolism.

While it is not right to eliminate all carbohydrates from food, sources of flour such as bread are probably the worst option.

It contains a lot of sodium

Excessive sodium consumption can lead to some health complications. The most worrisome is that more than 77% of the amount ingested comes from processed foods, among which bread is included.

This refined food can come with added phosphate and sodium bicarbonate, which in excess can cause fluid retention and arterial hypertension.

It has a high glycemic index

White bread is a fast-burning food with a high glycemic index. This means that because it’s not being used properly as a source of energy, it reduces insulin and produces high peaks of blood sugar.

Its effects on the body are compared with those produced by white sugar: it elevates glucose, affects the functions of the pancreas and affects metabolic disorders such as diabetes mellitus and cause you to become overweight.

It contains a lot of gluten

The wheat that bread is made with contains too much gluten. This mixture of proteins facilitates the fermentation of the food, making it more elastic, spongy and appetizing.

The problem is that many people have a sensitive digestive system that can’t properly process gluten.

How can you reduce your bread consumption?

Cutting out bread can be difficult for those who usually incorporate it in multiple ways in their regular diet. However, considering the risks involved, it is good to start taking some measures to minimize consumption.

Even healthy bread sold in the supermarket can be a significant source of calories if consumption is not moderated. For this reason, it is best to look for other sources of carbohydrates to replace breads in your diet.

Look for options with 100% wholewheat

Breads made with wholewheat contain more properties and nutrients than white bread can provide. While it is usually a bit more expensive, it is a healthy option regularly incorporate in your diet.

There are many restaurants that serve bread baskets as an accompaniment to their meals. In order to avoid consumption, an ideal option would be to ask the waiter not to leave it on the table.

How often do you consume bread? What variety do you choose? Now that you know the negative effects, try to find other healthier foods to replace it.

Delicious Recipe for Artisan Bread
If you want to learn how to make artisan bread at home, here are some tricks and also, information about their nutritional contribution. Read more »
Link copied!
Interesting Articles
Nutrition
Nutritional Information and Health Benefits of Peas