Why Do You Need to Increase the Zinc in Your Diet?

The importance of zinc in human health was initially described in the 1960s, with the publication of studies that proposed the possible relationship between the deficiency of this mineral with dwarfism due to nutritional causes in adolescents. 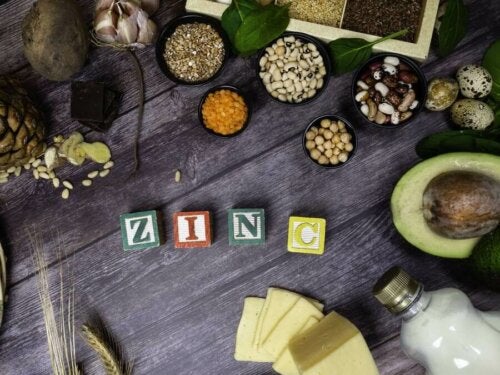 A mineral deficit can lead to health problems if you don’t change the situation. Although there are many minerals that you have to eat in order to enjoy good health, in this article we’ll focus on zinc and the importance of increasing zinc in your diet.

Zinc, as we already know, is a mineral. It’s a trace element, that is, a substance that your body needs small amounts of to function properly.

This mineral is found in all cells of the body and is essential for the regeneration of cell tissues and for DNA synthesis, among other functions.

You also need zinc for the senses of smell and taste. During pregnancy, lactation, and childhood, the body needs zinc to grow and develop properly.

Other functions of zinc are that it:

In addition to all these essential functions that zinc performs in the body, researcher Janet King and her team have made progress in this field. They have shown, through a study, that the benefits of increasing zinc in your diet are much more powerful than previously believed.

The World Health Organization (WHO), in its 2002 health report and based on food availability data by region, calculates that zinc deficiency affects about a third of the world population.

Researchers first described the importance of zinc for human health in the 1960s, when they published studies that proposed the possible relationship between the deficiency of this mineral with dwarfism due to nutritional causes in adolescents.

Currently, the clinical manifestations of zinc deficiency are known to include:

All these conditions caused by nutrient deficits affect each person differently and depend on whether the deficiency is moderate or severe.

Researchers estimate that mineral deficiency is associated with 16% of upper respiratory tract infections and 10% of episodes of diarrheal disease that occur worldwide.

Read also: Seven Iodine-Rich Foods You Should Include in Your Diet

Main sources of zinc in your diet: recommended foods

Below, we’ll talk about a series of foods that provide you with the amounts of zinc necessary to avoid all the problems we just mentioned. However, it’s important to know that you shouldn’t take zinc supplements if your doctor hasn’t recommended it.

An excess of zinc, just like a deficit, can trigger health problems such as hypotension, seizures, or joint pain.

Oysters, like seafood in general, are a food that has a large amount of zinc. For every 100 grams (4 oz) you eat, they provide up to 182 milligrams of this trace element. In addition, they provide significant amounts of iron and other nutrients your body needs such as omega-3 fats or vitamins.

Cocoa is rich not only in antioxidants and magnesium, but also in zinc. Obviously, dark chocolate is high in fat and has a fairly high amount of calories. However, 30 grams (1.2 oz) of dark chocolate can also give you 3 milligrams of zinc.

For all of these reasons, a varied and balanced diet that provides correct levels of trace elements such as zinc, will allow you to enjoy good health, avoid deficiencies, and take advantage of its benefits to your well-being.