Why Do Cases of Salmonellosis Increase in the Summer?

Salmonella is a fairly well-known disease. However, do you know why the number of cases increases in summer? 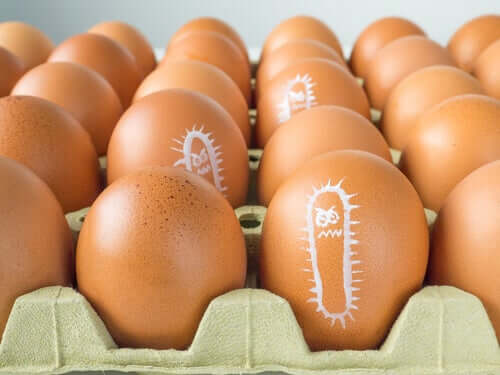 Summer is coming, and with it, so are high temperatures and travel. Tasting foods from other cultures on the edge of the beach can be an unforgettable experience, but you can’t ignore that there’s a certain inherent risk of eating food that isn’t regulated by health protocols. A daring tourist can end up being a victim of salmonellosis.

The bacteria of the genus Salmonella, which cause the infection salmonellosis, are present throughout the year. However, there are always more cases of this food poisoning in summer.

Why? Keep reading to learn more!

Salmonella is a bacterial genus consisting of facultative anaerobic gram negative bacilli – that is, they can obtain energy in the absence of oxygen. We commonly call these bacteria salmonella. The natural habitat for these microorganisms is, unfortunately, the gut of any type of warm-blooded animal, including humans.

There are various strains of salmonella, as more than 2,500 serotypes have been discovered. Most of them belong to the species Salmonella enterica, which represent more than 99% of salmonellosis in humans.

Salmonellosis doesn’t happen easily, since these bacteria can’t usually stand the acidic pH of the stomach and can die before reaching the intestine. Those that make it through have to face the bacterial flora and the rapid intestinal transit.

Only a small percentage of these pathogenic microorganisms manage to adhere to and reproduce in the intestinal mucosa. It’s then that the characteristic symptoms begin:

You may also be interested in: Chronic and Acute Diarrhea: Causes and Treatment

Why do cases of salmonellosis increase in the summer?

Thus, the greater the bacterial load during the exponential and stationary phases, the greater the risk of contracting salmonellosis if a human being is exposed to contaminated food. Still, it’s not entirely clear how much bacteria a person has to eat to develop this food poisoning. Researchers estimate between 1 and 10 million.

Learn more: The Differences Between Viruses and Bacteria

As we mentioned, the higher the temperature, the faster the bacteria reproduce and the more likely it is that a person will ingest a bacterial load large enough to catch salmonellosis.

Still, not all the risk is due to the temperature itself. As we said above, some habits can increase the probability of contagion, such as the following:

Also, other factors can increase the rate of salmonellosis in the long term. In fact, a study published in the journal,  Foodborne Pathogens and Disease warns us that climate change seems to be correlated with the increase in these infections in the United States. This makes sense due to the increased temperatures encouraging bacterial growth.

Prevent salmonellosis in the summer

In summary, salmonella will inevitably multiply more during the summer. However, you should take the proper hygiene measures and use common sense when choosing a restaurant to eat in, for example.

Summer is a time of special risk when it comes to food poisoning. It’s important to be careful when handling and preparing food. After all, it’s better to prevent than to cure.

7 Reasons Why You Might Get Gastroenteritis
Gastroenteritis is one heck of an uncomfortable condition. It results in loss of appetite, diarrhea, nausea and vomiting. However, there are many possible causes for gastroenteritis. Despite that, do you know what they are and how to prevent them? Read more »
Link copied!
Interesting Articles
Illnesses
Congenital Insensitivity to Pain: What Is It?

When we talk about a dust allergy, we're actually referring to the allergy to dust mites that live in this environment. You can't be allergic to the dust itself, but…

Interesting Articles
Medication
Uses and Side Effects of Citalopram