The WHO's Findings on Meat and Cancer

What is the relationship between the consumption of meat and the appearance of cancer? Today, we'll see what the WHO says about it. 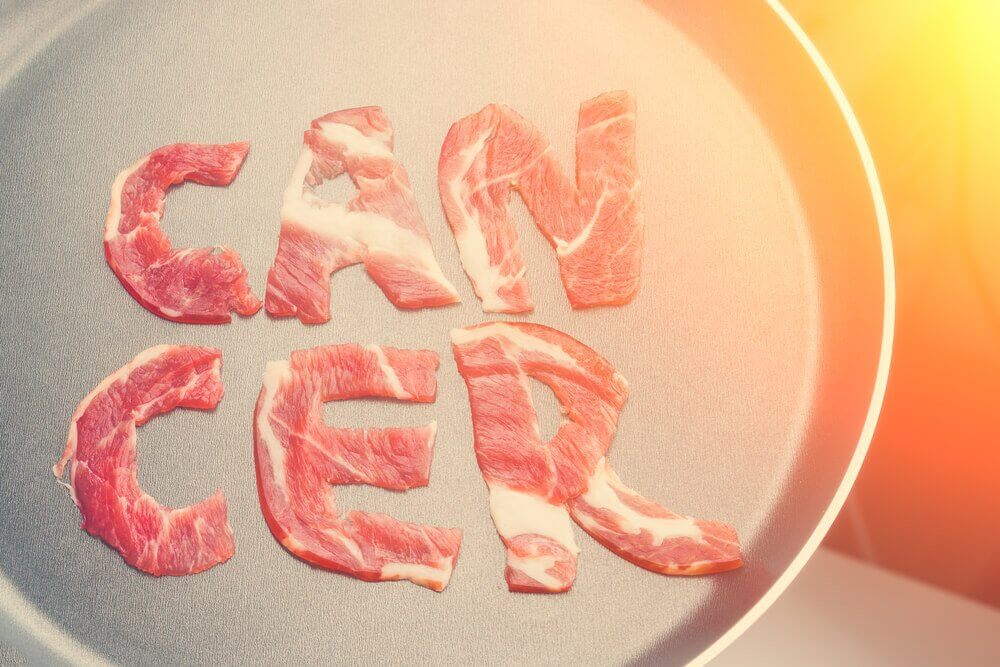 Did you know that between 75 and 80% of carcinogenic diseases are derived by external factors that change our body? Unfortunately, our eating habits are one of the causes of this condition. For that reason, today we’ll explain what the World Health Organization (WHO) says about meat and cancer.

Unfortunately, scientists still can’t identify why some people are more likely than others to suffer from some types of cancer. However, various scientific studies state that genetics, as well as specific environmental and behavioral elements, are the main factors that influence the alteration of the cells of our body.

If your parents or certain relatives suffered from some type of cancer, such as breast and colon, you may inherit a predisposition to this disease. However, it should also be made clear that, although genetics plays a roll, it doesn’t mean that you’ll develop it.

Likewise, there are also environmental and behavioral agents that can produce these carcinogenic changes in your cells.

Among them are addiction to tobacco, alcohol or exposure to chemical components such as cigarette smoke or radiation, such as ultraviolet rays from the sun.

The National Cancer Institute (NCI) describes cancer as a set of linked diseases. In these diseases, certain cells that make up the body begin to grow and multiply uncontrollably and without interruption. This allows for the formation of masses that are known as tumors.

The WHO classifies red meat as all muscle tissue that comes from mammals such as:

In turn, it defines processed meats as all those that, once separated from the animal, are altered. This is done through processes such as:

For the most part, processed meats come from animals like cows and pigs. However, they also come from birds and meat byproducts such as blood, giblets and red meats.

Some clear examples of these meats are:

The WHO Study on Meat and Cancer

A study by the WHO has revealed some interesting information regarding the links between meat and cancer. The evidence that consumption of red meat influences the development of colorectal cancer is limited.  However, they include meat in group 2A of carcinogenic agents, which is “probably carcinogenic to humans.”

On the other hand, this institution explains that a very high consumption of red meat does cause cancer. Consequently, they included this agent within the so-called group 1, “carcinogenic to humans.”

“This classification comes from sufficient evidence from epidemiological studies that show that the consumption of processed meat causes colorectal cancer, ” said the report.

It should be made clear that the study included prolonged and continuous consumption of processed meats in group 1.

The Risks of Meat Consumption

According to the estimates from the Global Disease Burden Project, the WHO states that diets that are high in processed meats are responsible for approximately 34,000 cancer-related deaths a year worldwide.

Also, they claim that the intake of processed meats is a cause of colorectal cancer. In addition, it also has a link with stomach cancer.

However, they do clarify that the evidence is not entirely conclusive.

Overall, eating a 50 gram serving of processed meat a day increases your risk of suffering from colorectal cancer by about 18 percent.

Seeking an answer to the fight against meat and cancer, the World Health Organization ratified their 2002 recommendation. There, they advised that one should reduce and moderate consumption of processed meats in order to reduce the risk of colorectal cancer.

This goes with the scientific evidence from the International Center for Cancer Research (ICCR). There, 22 experts from 10 countries worked to analyze more than 800 different investigations on cancer in humans.

Read also: 6 Nutrients You Need If You’re Over 40

After reviewing this information, the best recommendation is to regulate your consumption of these products. From there, it’s important to have a balanced diet that gives your body all of the nutrients it needs.

If you have any questions, you should consult a nutrition specialist.

That way, you will get a diet that’s best the particular needs of your body.

Scientific Advances Develop Vaccine Against Cancerous Tumors
A new vaccine might give hope for a cure to cancer without as many side effects. Here we comment on the scientific advances that drive the search for a vaccine against cancerous tumors, the findings made to date and other information of interest. Read more »
Link copied!
Interesting Articles
Illnesses
Causes, Treatments and Symptoms of Oliguria