When to Worry About Gestational Dysmenorrhea

Gestational dysmenorrhea shouldn't be a cause for concern, at least in principle. Typically, this symptom disappears after the first trimester. However, consult your doctor if the pain is severe or if it doesn't go away. 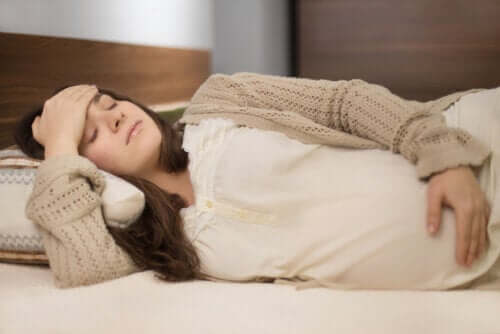 The thought of having gestational dysmenorrhea is often confusing, as the term refers to pain associated with menstruation. It usually appears during the first day of a period and two or three days after it.

This uterine discomfort manifests as colic and these are common during pregnancy. This is because they’re due to the hormonal changes a woman in this stage goes through.

Dysmenorrhea involves severe, cramp-like pain that’s sometimes intermittent and other times sharp and continuous. It can extend to the legs or the back, as well as causing nausea, headaches, constipation, and diarrhea.

There are two types of dysmenorrhea: primary and secondary. The first condition appears in young women along with their menstrual cycles. It tends to disappear over time. The secondary is linked to genital malformations, but its intensity increases with age.

The percentage of women of childbearing age who suffer from dysmenorrhea ranges from 25% to 60% of the female population. One can keep this type of discomfort or pain under control for the most part, although estimates indicate it can be disabling. Especially when it becomes more intense, and dysmenorrhea is one of the leading causes of female absenteeism.

What do you think about having Three Days Off For “Painful Periods”?

A woman experiences all sorts of hormonal changes during pregnancy. This is because the female body undergoes modifications influenced by variations in the blood concentration of given substances.

That is why gestational dysmenorrhea is common, especially during the first trimester. However, it can last throughout the entire gestational period.

This kind of pain is similar to menstrual cramps, even if there’s no bleeding. It’s a sensation that originates due to the changes a uterus is undergoing. That is, in the process of preparing for childbirth. However, the pain diminishes as the pregnancy advances under normal conditions.

Cramps are more frequent during the first trimester due to the accelerated development of the baby at that stage. They feel like stretches on the sides of the belly and occur because the uterus is expanding. As the organ grows, it forces the muscles to increase their elasticity, as well as the ligaments.

A pregnant woman may also experience this kind of pain during the second trimester. When this happens, it’s due to the fact that the teres major muscle overstretches — it’s the one that supports the weight of the uterus. The discomfort tends to feel like a stab in the lower abdomen. It’s also common to experience cramps after exerting yourself.

Chronic dysmenorrhea during pregnancy may interfere with your enjoyment of this period of your life. You must attend to the symptoms and, if they’re not worrisome, just follow a few tips to obtain relief.

A usual recommendation is to slightly modify your diet but always after discussing it with your obstetrician. For instance, you might have to give up caffeine, as it’s too stimulating. Also, your doctor may prescribe suitable supplements for you, based on the general recommendations for folic acid and iron.

In addition, try to move a little if there’s a pain in your lower abdomen. There are some exercise routines specifically designed for pregnant women and they could be helpful in these cases. Don’t forget to remain well-hydrated at all times.

Check out the Ten Ways to Relieve a Painful Period

When to worry about gestational dysmenorrhea

It’s a serious matter when gestational dysmenorrhea doesn’t subside naturally or by putting the measures suggested above into practice. So, consult your obstetrician if the pain becomes too intense.

Seek a consultation especially if you experience severe pain that won’t go away or pain and contractions in the lower abdomen. Likewise, you must see a doctor if there are vaginal cramps, bleeding, discharge, or if you have gastrointestinal symptoms or dizziness.

Bleeding that comes with discomfort or cramps is always a reason for alarm. Every trimester comes with its own common disorders; thus, knowing how to identify them early on reduces your health risk and that of your baby. Keep your obstetrician’s emergency contact numbers handy!

6 Menstrual Irregularities You Shouldn’t Ignore
Even though menstrual irregularities are not usually a sign of serious health problems, they can sometimes signal hormone imbalances, nutritional deficiencies, or other conditions that need attention. Read more »
Link copied!
Interesting Articles
Pregnancy
Is it Risky to Tan During Pregnancy?