If you suffer from vascular dementia, your symptoms will probably worsen progressively, rather than gradually as it happens to Alzheimer's patients. Nevertheless, there are some ways to improve your quality of life with this condition. 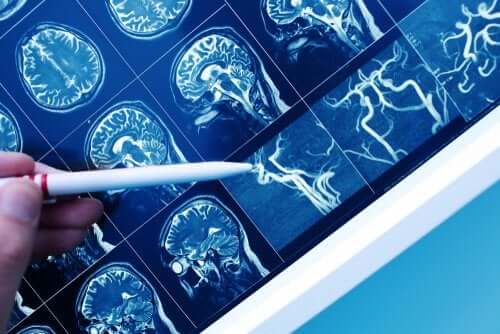 Vascular dementia is the second most common type of dementia, after Alzheimer’s disease. It accounts for between 10 and 20% of cases.

Like all dementias, it’s characterized by cognitive impairment. This refers to the loss or deterioration of some mental faculties, such as memory, reasoning, or behavior.

Vascular dementia is brought about by injuries caused by cerebrovascular disease. What happens is that certain areas of the brain don’t get enough blood supply and ultimately get injured. In this article, we explain why it occurs, as well as its symptoms and treatment.

To diagnose vascular dementia, some basic requirements must be met. First of all, there are criteria for dementia. As we’ve mentioned above, the criteria are based on the deterioration of mental faculties. To measure this deterioration, doctors use different tests and questionnaires.

On the other hand, there must be evidence of cerebrovascular disease. This can be observed in a history of vascular problems or certain signs during the physical examination.

Medical professionals also rely on imaging such as CT or MRI scans to observe the possible brain injury.

A stroke can cause vascular dementia, but not always. In fact, vascular dementia can also be caused by other disorders that affect the blood vessels. Any condition that decreases cerebral blood flow, such as atherosclerosis, can cause it.

There are several risk factors for dementia. Suffering from diabetes or hypertension, having high cholesterol levels, or smoking increases the risk of vascular dementia. Thus, controlling these factors can reduce its incidence.

The symptoms of vascular dementia vary depending on the part of the brain that suffers reduced blood flow. Overall, the symptoms are similar to those of other types of dementia.

First of all, the patient may feel disoriented and have difficulty concentrating. Also, their ability to organize their thoughts decreases. One of the most alarming symptoms is memory loss.

Other common symptoms are:

The symptoms may be more obvious and sudden when they manifest after a stroke. In other cases, the symptoms worsen progressively. This usually allows a differential diagnosis of Alzheimer’s disease, which usually develops gradually.

However, this condition can also develop subtly and gradually. As the disease progresses, the symptoms become more obvious and serious. Patients who suffer from vascular dementia eventually become unable to care for themselves.

This article may interest you: The Differences between Dementia and Alzheimer’s

How to prevent vascular dementia

Protecting the health of blood vessels is essential. As we mentioned above, maintaining normal blood pressure is one of the most important steps. Also, you must control or prevent diabetes. It’s advisable to follow a good diet and exercise.

On the other hand, it’s very important to quit smoking, as tobacco damages blood vessels. Similarly, you must maintain good cholesterol levels. That’s because this may help reduce the risk of stroke. This is why the diet you follow is so important.

You should pay attention to these preventive measures. This is because there’s no effective treatment for vascular dementia. Treatment usually focuses on the management of risk factors.

You may enjoy this article: Non-Alzheimer’s Types of Dementia

How do they diagnose vascular dementia?

This condition is diagnosed by the likelihood that the patient’s symptoms are caused by a vascular problem. This likelihood increases depending on the patient’s history of stroke and if they’ve suffered from another heart or blood vessel condition.

To guide the diagnosis, blood tests are also performed. The medical professionals focus on cholesterol and blood sugar levels and also keep an eye out for anemia or other conditions. Imaging tests and ultrasounds of the carotid arteries are also performed to determine their condition.

Also, neuropsychological tests help distinguish between the types of dementia. Medical professionals evaluate the patient’s ability to speak, write, and work with numbers, among other things.

Patients who suffer from vascular dementia often have a harder time analyzing a problem. However, they have less difficulty learning and remembering information, unlike those who suffer from Alzheimer’s.

It’s very important to have a healthy lifestyle to prevent vascular dementia. Watching what you eat and exercising are two basic pillars of prevention. However, if, despite this, you perceive any warning signs, don’t hesitate to go see your doctor as soon as possible.

Major Neurocognitive Disorder (Dementia)
Neurocognitive disorders affect memory, perception and problem-solving. Unfortunately, there's no cure for this condition. The good news is, however, that there are treatments for the symptoms. Read more »
Link copied!
Interesting Articles
Illnesses
Everything You Should Know about Hypochondriasis