What's the Best Way to Eat Rice and Why?

Rice, aside from being the perfect side dish for meals, boasts benefits for the body. Consuming rice helps the nervous and cardiovascular systems. Learn how to cook it the right way. 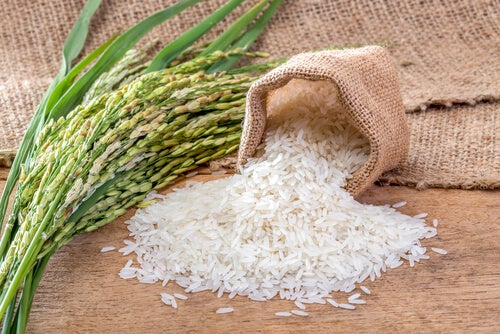 Do you know the best way to eat rice?

As one of the most important and common foods in gastronomy on an international level, rice can be a great accompanying dish for meals.

Its origin, despite many debates, points towards the Asian territories, specifically towards China. Rice is also the second most grown grain on the planet, second only to corn.

Even though it’s normal to see a limited selection of rice at the supermarket, there’s actually a rich variety of rice that offers diverse options in the kitchen.

Long grain rice is, perhaps, the most commercial type. It’s widely eaten in places such as India, the United States and China.

This type of rice, sometimes also called “Bomba“, has quite the presence in European cooking. It’s the ideal rice for making Spanish paella.

Rice of this variety has a special niche: it’s the rice used for sushi.

We recommend that you read: How to Use Rice to Get Enviable Skin

The benefits of rice

Rice is one of the main foods rich in carbohydrates. These are micro-nutrients that are responsible for giving the body the fuel it needs in order to be as productive as possible in the every day. In other words, carbohydrates are the energy source that the body needs in order to do activities that demand physical effort.
Also, rice also contains vitamins B3, B6 and B9. The former aids in DNA reparations, as well as cleaning and eliminating toxins from the body. The second B vitamin prevents dryness and prevents anemia, in addition to conserving cells.

The latter is directly linked to the development of the nervous system, making sure the body has enough fuel without causing it to tire out. Thanks to its composition, it’s also free of cholesterol.

We should be happy to eat the rice husk because it’s a diuretic.

For many people, diuretics make a good remedy for various stomach problems. Rice acts as a soothing element because it’s a food rich in fiber. It can help the body eliminate excess liquid thanks to all of the starch that it contains.

It’s known as resistant starch that can help intestinal flora and the colon. As a result, the body can burn fat faster.

Cooked rice is a perfect accompanying dish for the intestine because it prevents diarrhea.

Benefits for the heart

There are several recommended foods for diets that aim to lower blood pressure and rice is one of them.

Because it’s low in sodium, rice can maintain good blood circulation and lower blood pressure. It also reduces stress levels, which is helpful for the heart.

Rice bran oil is one of the products that’s extracted from rice. It boasts antioxidant properties that strengthen the cardiovascular system.

Benefits for the skin

Rice bran oil also has an important and powerful impact on the skin.

Though it once seemed like myth, today it’s backed by scientific studies: there’s a relationship between washing rice well and cancer prevention.

When cooked improperly, the industrial pesticides that are used to grow and sell rice faster can remain behind in the rice. The result is the terrible illness.

Its arsenic content can lead to different complications, which is why you should boil rice in water.

How to prepare rice

The basic principle and its preparation is simple: double parts of water for every part of rice that you use.

It’s most common to measure them out using a small measuring unit, or a cup, in order to make the process as simple as possible.

There are many recipes that call for rice and here, we’ll show you how to make spinach rice– a healthy dish.

Boil the rice, add the spinach and after, the cream cheese. Mix and add salt and pepper as you’d like.