18-20% of metastatic breast cancers are HER-2+. In other words, they have an overexpression of the HER2 oncogene. Experts developed a new drug called T-DM1 for these types of tumors. In this article, learn all about it. 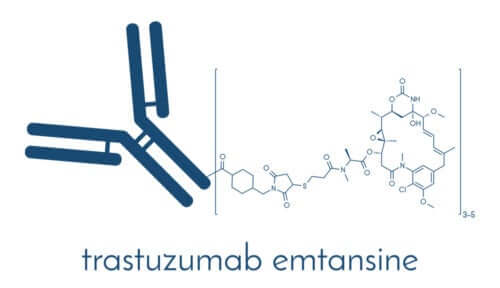 T-DM1 is a new, unique, and selective antibody drug conjugate approved by the European Medicines Agency (EMA) for the treatment of advanced HER2-positive breast cancer. HER2 is the protein “epidermal growth factor receptor 2” that favors the growth of cancer cells. You can find it on the market as Kadcyla.

The efficacy of T-DM1

18-20% of metastatic breast cancers are HER2-positive. In other words, they have an overexpression of the HER2 oncogene. Before the development of specific anti-HER2 therapies, the prognosis of patients with HER2-positive tumors was significantly worse than the rest. An oncogene is a gene that, due to its ability to induce mutation or transformation, leads to the formation of cancer in a cell.

The second line treatment of advanced HER2-positive breast cancer was the only one who was approved to date, which is a combination of chemotherapy with capecitabine plus lapatinib, a tyrosine kinase inhibitor of HER2/EGFR.

How T-DM1 exerts its effect on the body

As we mentioned above, T-DM1 is the combination of two drugs: trastuzumab and DM1. T-DM1 combines the mechanisms of action of these two drugs:

As it inhibits tubulin, it doesn’t allow the cancer cells to divide, which ultimately causes cell death by apoptosis. The results of in vitro cytotoxicity assays show that DM1 is between 20 and 200 times more powerful than vinca taxanes and alkaloids.

You may also want to read: Breast Cancer: The Different Types, Symptoms and Treatment

The side effects of T-DM1

Side effects are the undesirable and unintended events that a patient can expect when they start treatment with a drug.

In this regard, the most-reported side effects are nausea, fatigue, and headache. ≥25% of patients suffered from them. So, experts evaluated the safety of T-DM1 in a total of 1871 patients with breast cancer in different clinical trials. They discovered that the most common serious reactions were:

You may also want to read: Cryoablation: A New Treatment Option for Breast Cancer

The data reported by studies show that T-DM1 is a very important advance in the treatment of advanced HER2-positive breast cancer. It produces a survival improvement in patients who previously took trastuzumab.

Is it Possible to Prevent Breast Cancer?
Is ot possible to prevent breast cancer? In this article, you'll discover 6 recommendations that will help you minimize the risk of this type of cancer. Read more »
Link copied!
Interesting Articles
Beauty
What You Need to Know About Taking Biotin