Scleral buckling surgery has low risks, although it requires several weeks of care to avoid complications. Today's article will describe the procedure. 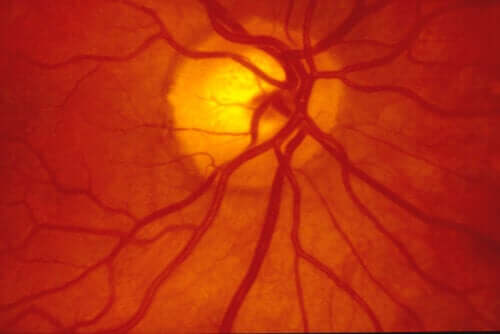 Scleral buckling surgery is a procedure to repair a retinal detachment. It consists of the introduction of silicone material to position this tissue back to its original state.

There are other alternatives, although this is one of the most used by ophthalmologists. Below you’ll find the most important details concerning this surgery. Continue reading!

Why does the retina detach?

This structure has the appearance of a thin layer in the back of the eye, but it’s quite complex from a microscopic point of view. It’s thanks to the retina that we can see images clearly, which is why any damage leaves permanent sequelae.

There are many mechanisms involved in retinal detachment and there’s an accumulation of fluid (called vitreous humor) behind the structure in every single one of them. This leads to the gradual loss of blood supply and subsequent death of the tissue.

Detachment can happen spontaneously in some people with risk factors. According to a Mayo Clinic publication, the most important are:

Find out more about Loss of Vision: Causes and Symptoms

How does scleral buckling surgery work?

According to a publication by Texas Retina Associates, scleral buckling surgery involves the introduction of a silicone band or sponge near the sclera. The latter structure is the white part visible in the eyes, around the iris.

This causes a slight increase in pressure and displacement of the intraocular structures to bring the retina back to its original site. The procedure requires some incisions on the outer surface of the eye to insert the material.

The treating physician may perform some additional techniques to prevent the recurrence of the disease. The most commonly used are laser photocoagulation and Cryopexy. In both cases, scar tissue seals the breaks in the injured tissues.

As with all surgical procedures, there’s usually a brief preoperative stage, which consists of:

Depending on the severity of the retinal detachment, scleral buckling surgery could last between one and two hours minimum. The general steps are:

It’s also possible to perform the complementary procedures mentioned in the previous section, even though each one of them has its own technique.

Read about Presbyopia or Eyestrain

The effectiveness of this procedure is usually excellent, even though there are some complications (we’ll mention them in the next section).

There’ll be somatic pain during the first days of recovery along with redness and constant tearing. These symptoms will subside as the days go by though.

In addition, the physician may give other indications, such as:

As the weeks go by, you’ll have to consult your attending physician to verify the effectiveness of the procedure.

What are the risks of surgery?

There are times when the procedure may cause complications in the first few weeks although it’s rare. The most important conditions are:

Therefore, consult an ophthalmologist in case of loss of visual acuity or if you visualize lights or foreign objects. Swelling around the eye and increased pain are other warning signs.

Scleral buckling surgery is an effective option for an emergency

Retinal detachment is a medical emergency that can cause permanent blindness. Consult an ophthalmologist as soon as possible if you notice the symptoms mentioned above.

Finally, there are other effective procedures, such as pars plana vitrectomy, but scleral buckling surgery remains the first choice for many specialists.

What You Need to Know about Diabetic Eye Disease
Diabetic eye disease is a term for a group of conditions that usually show no symptoms until the damage is significant. Read on! Read more »
Link copied!
Interesting Articles
Treatments
Advantages and Disadvantages of LASIK Surgery