Phantom limb syndrome is an uncomfortable condition for amputees. Although there’s still no specific treatment, experts have managed to reduce the discomfort in those who suffer from it. 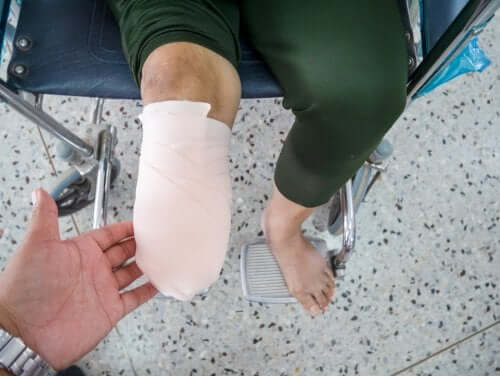 Phantom limb syndrome appears when a person with an amputation continues feeling the amputated or missing limb. Despite the amputated limb no longer existing, the brain still believes the body part is there.

The sensations the patient feels are pain, itching, heat, and pressure. They can suffer all of them together or one at a time. It doesn’t always manifest in the same way.

Physician Silas Weir Mitchel first described phantom limb syndrome. This professional cared for wounded soldiers in the North American Civil War, many of them amputees due to war injuries. He observed that many of them suffered from phantom limb symptoms.

The sensations are so frequent that experts estimate that up to 85% of amputees suffer from the condition. Over time, it becomes less apparent. However, it can last several decades after amputation.

When a limb is amputated, a stump remains. This stump has nerve endings which can cause pain, as the brain simulates the location of the part of the limb that’s no longer there. Inflammatory fluid or blood can collect in the stumps, contributing to the pain.

As soon as the amputation is completed, during the first month afterwards, almost all amputees perceive the limb is still attached. It’s a sensation, not pain.

Keep discovering in this article: Congenital Insensitivity to Pain: What Is It?

This is the most bothersome clinical form and the hardest to treat. Along with pain due to a limb that no longer exists, there may be a sensation of itching or high temperature. It’s quite persistent over time, and there are still scientific discussions about its real origin. In other words, if it’s due to the peripheral nerves or the brain.

Why does this syndrome happen?

Phantom limb syndrome is due to the representation that the brain has of the body. To function on a daily basis, the brain develops a body schema of how we are externally.

When a limb is amputated, the body structure that the brain assimilated prior to amputation persists. For the brain, the limbs remain in the same place, until it assimilates a new structure.

The development of the new schema is slow and the signals confuse the neurons. All the new sensory information overwhelms the brain, which has to re-learn the body it’s in.

In neurological terms, we’re talking about somatosensory memory. This memory of the nervous system is fed from the moment we’re conceived with the sensations that we perceive.

In other words, the experiences of pain, heat, cold, itching, and discomfort, among others, help the body to perceive itself.

The symptoms of phantom limb syndrome

The patient reports the signs of the presence of phantom limb syndrome. The doctor diagnoses the amputee when they explain what they’re feeling. Here are the most common symptoms amputees suffer from:

Keep reading to learn more: This Model Had Her Leg Amputated Because of a Tampon

There are two treatment options for phantom limb syndrome. Doctors must use both. The first is pharmacological and the second comprises therapies and techniques.

Regarding non-pharmacological therapies, kinesiotherapy, electrical stimulation, mirror therapy for neurons and the nervous system, and even brain surgery can prove helpful. However, no technique is completely effective at easing symptoms.

This approach isn’t easy and is still being studied. Advances in the understanding of the causes and pathophysiology of the brain have led to advances in the discovery of the origin of phantom limb syndrome.

The Fourteen Steps Doctors Follow for a Supracondylar Amputation
The main objective of a supracondylar amputation is for the stump to heal properly and without complications so the patient can return to their normal life. Read more »
Link copied!
Interesting Articles
Illnesses
Joan Massagué and the Origin of Cancer Metastasis