Atopic dermatitis is a skin disorder that has become more common in recent years. A fifth of all children currently suffer from it. Although it often affects children, it can manifest at any age. 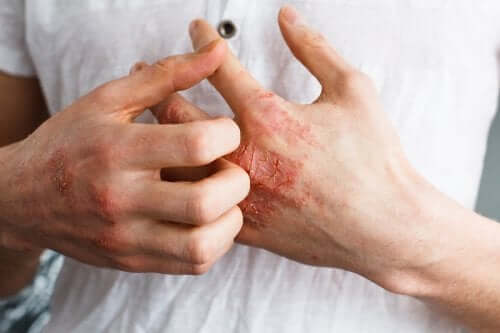 Atopic dermatitis, also known as eczema, is a skin disorder that causes redness and itching. It’s more common in children. However, it can manifest at any age. It’s generally chronic, but can go away for certain periods and then come back.

Currently, experts believe that this disease affects about 20% of children worldwide. Although it’s slightly more common in the developed countries of the northern hemisphere, it occurs all over the world. Between 3 and 5% of children with atopic dermatitis will continue to suffer from it until they reach adulthood.

Also, the incidence of this disease is increasing. This is due to the effects of environmental pollution and unhealthy habits. For example, constant stress and poor sleep can make it worse. Although experts haven’t yet discovered a cure for this disease, there are several ongoing investigations.

What is atopic dermatitis?

Atopic dermatitis is a skin disease that causes redness and itching in different areas of the skin. Moreover, it’s a common cause of excessive dryness.

Atopic dermatitis is a disorder that manifests as skin redness and itching. Atopic skin is characterized by its dryness. This leads to flaking and irritation, causing symptoms such as bothersome itching. Sometimes, it leads to the appearance of small aqueous bumps.

According to the Spanish Pediatric Association, atopic dermatitis can be classified into three groups:

This article may interest you: Learn How to Help Relieve Atopic Dermatitis Symptoms

Science hasn’t pinpointed the causes of this disease. Nevertheless, we know that several factors can influence the onset of it or its aggravation. These factors are:

Likewise, experts know that stress and insomnia can trigger the disease. Sweat also seems to influence it, as well as the use of nylon or wool garments. This disease often occurs in people with food allergies or other types of allergies.

You should also read: The Differences between Atopic and Seborrheic Dermatitis

The symptoms of atopic dermatitis include skin lesions with a crusty reddish appearance. The severity varies from patient to patient.

The main symptom of atopic dermatitis is skin lesions. They have a crusted and red appearance. Also, they’re accompanied by very intense and prolonged itching. This often leads to emotional problems due to how bothersome the itching is.

Those who suffer from this disease for a prolonged period have an increased risk of developing cataracts between ages 20 and 30. Experts still don’t know why. Also, they’re more likely to develop eczema herpeticum if they contract the herpes simplex virus.

A medical professional can usually diagnose the disease by simply looking at the patient’s skin. A skin examination and analysis of medical history usually suffice. Sometimes, medical professionals do some tests with patches. However, laboratory tests are rarely required.

Are you experiencing symptoms of this condition? If so, you should visit your trusted dermatologist as soon as possible. The professional will be in charge of properly diagnosing and treating you.

Basic Care for Atopic Dermatitis in Babies
Atopic dermatitis in babies is a condition that typically worries parents. Fortunately, however, it can quickly improve with the right treatment. Read more »
Link copied!
Interesting Articles
Illnesses
Causes of Postmenopausal Osteoporosis and Treatment