A liquid biopsy can be of any biological fluid, such as blood, urine, or pleural fluid, where a biomarker can be determined. It’s a technique that has some advantages over traditional biopsy and is very useful for monitoring cancer patients. 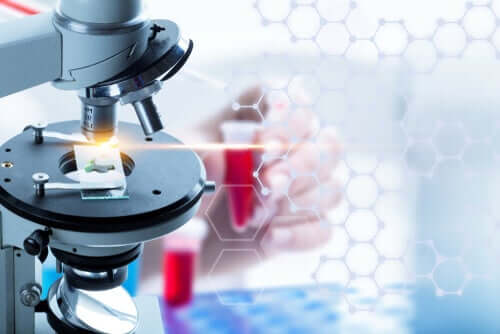 A liquid biopsy is a method of characterizing a tumor. People also know it as “blood-based biomarkers test”. Up till now, the only method that allowed medical professionals to determine the type of tumor a patient had was a tissue biopsy. However, tissue biopsies have a number of limitations. This prompted the development of new and less invasive techniques, such as liquid biopsy.

This type of method seeks, quantifies, and characterizes tumor cells, as well as their nuclei DNA or tumor DNA circulating in the blood of patients with certain types of cancer. The most sought-after goal is to count the tumor cells in the blood to predict survival. The more tumor cells a patient has, the worse their prognosis. This type of method is applied in breast, prostate, colon, rectal, and lung cancer, among others.

A liquid biopsy can be of any biological fluid, such as blood, urine, or pleural fluid. These liquids can determine a biomarker that, just as in tissue biopsy, represents the tissue that produced the biomarker.

As we mentioned above, tissue biopsy, despite being one of the best methods to determine the characteristics of a tumor, has a few limitations. Firstly, it requires a tumor sample. In other words, it’s an invasive technique that requires minor surgery, which is uncomfortable for the patient.

Like all surgery, it may not be a suitable option for certain patients in delicate situations or in advanced stages of the disease. Another limitation is that the tissue selected for biopsy may not be the most suitable. Also, it may not be relevant to the overall assessment of the tumor. In addition to that, the results may take several days to arrive.

On the other hand, tissue biopsy only allows doctors to know the mutational status of the tumor at a particular time. Thus, to follow-up on the patient’s status, they should undergo several surgeries as the disease develops. Also, if the sample was extracted a long time ago and in another stage of the disease, it might not be the best choice to decide the patient’s first line of treatment.

A final limitation is that, depending on the location of the tumor, it may sometimes be impossible to do a biopsy. In these cases, a liquid biopsy comes to the rescue.

The advantages of a liquid biopsy

A liquid biopsy offers the advantage of quickly detecting mutations in certain tumors in a sensitive, convenient, and reliable way for both the patient and oncologist. Also, it allows the detection of mutations in the DNA found in the blood in order to determine the best available treatment options.

Furthermore, it’s much less invasive than a traditional biopsy. To do a liquid biopsy, a medical professional simply has to do a blood test and apply advanced and ultrasensitive analytical techniques, such as BEAMing technology.

As it only requires a blood draw, a liquid biopsy can be performed without affecting the patient’s well-being. In addition, it’s more accessible to a greater number of patients than a tissue biopsy. This fact implies the possibility of obtaining disease data in real-time.

Finally, we should mention that a liquid biopsy is representative of the entire tumor, not only of a part of a tumor. Also, it allows you to monitor the disease through time. This was a limitation of traditional biopsy.

This article may also interest you: The First Hormonal Symptoms of Pancreatic Cancer

When to perform a liquid biopsy

A liquid biopsy is perfect when a medical professional couldn’t get enough tissue from a tissue biopsy. Another indication is when the tumor is located in a place that’s difficult to access. Some of these difficult locations are:

Discover: Detect Stomach Cancer in Two Hours With This Test

A liquid biopsy is a very useful method that can replace the invasive technique of tissue biopsy. It has many advantages over traditional biopsy. However, experts are still studying it to discover further uses.

Opioid Treatment for Cancer Pain
People with cancer use one or another opioid treatment to deal with their intense pain as it's often intense and disabling and may arise due to a tumor. Read more »
Link copied!
Interesting Articles
Treatments
What's a Gingival Smile and How's It Treated?