What You Need to Know about Uterine Polyps

In most cases, uterine polyps don’t cause any symptoms. Although they’re almost always benign, about 1% of cases can become a malignant condition. Want to know more about them? 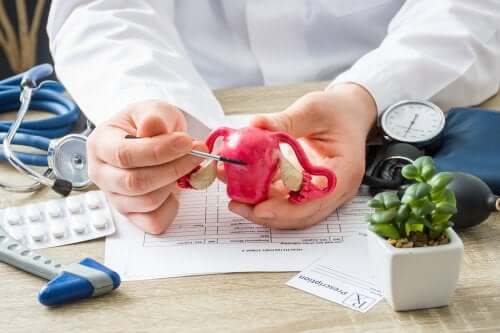 Uterine polyps are protuberances that grow in the inner wall of the uterus. They have different sizes, ranging from a few to several inches. Some can even reach the size of a golf ball.

Experts don’t yet know how widespread uterine polyps are. This is because, in many cases, they don’t cause any symptoms. Therefore, the women don’t consult their doctors. However, experts estimate that its prevalence is between 10 and 24% of the total number of women worldwide.

They most commonly appear in women aged between 40 and 65. Nevertheless, there have even been cases of uterine polyps in 12-year-old girls and 81-year-old women. Therefore, they can appear at any age.

What are uterine polyps?

Uterine polyps are common in women who are approaching menopause. In this regard, their formation is one of the causes of postmenopausal bleeding.

They’re small growths in the inner wall of the uterus. This wall is called the endometrium, which is why they’re also known as “endometrial polyps”. They occur due to cell proliferation and the consequent growth of the endometrium.

A woman can have one or more uterine polyps. They usually remain within this organ, but sometimes slip through the cervix into the vagina. They’re more common in women who are approaching menopause or who already went through it.

The vast majority of uterine polyps are benign. Only 0.5 to 1% of them are malignant. Generally, malignant polyps are those that occur after menopause, have a size of more than 1 inch, and cause postmenopausal bleeding.

This article may interest you: Menorrhagia: Symptoms, Causes, and Treatment

Most uterine polyps don’t cause symptoms, and they’re usually detected during a routine examination. In cases where there are symptoms, these usually include the following:

Medical professionals diagnose uterine polyps through various tests such as:

You should also read: 5 Facts About Uterine Fibroids That Every Woman Should Know

To date, there’s no definite cause to explain their appearance. However, there are several identified risk factors.

Science doesn’t know the reason why they manifest. Hypotheses have been proposed about their possible genetic, hormonal, and other origins. However, there are no conclusive results so far.

Nevertheless, experts have detected that there are some risk factors. They are the following:

The usual treatment for this condition is surgical removal or polypectomy. This procedure is performed by uterine curettage or scraping or by surgical resection through hysteroscopy. The latter method is the safest and most effective.

Experts state that medical professionals should perform surgery in the following cases:

In cases where the polyps arise from the ingestion of tamoxifen, the medical professionals should carefully study each particular situation. In this regard, the recommendation is that all women go to their gynecologist for periodic checkups to detect any problem.

9 Symptoms of Breast Cancer All Women Should Know
Breast cancer, is one of the most common cancers among women, as a matter of fact, it is the second cause of death in the entire population. Read more »

Interesting Articles
Nutrition
Is Hot or Cold Food Healthier For Us?