What Thrombosed Hemorrhoids Are and How to Identify Them

Thrombosed hemorrhoids are the most severe complication of hemorrhoidal disease. The patient who suffers from them has continuous pain and cannot even sit up. 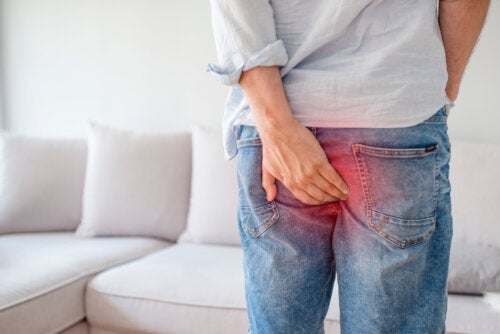 Hemorrhoidal disease is the most frequent proctological illness and one of the main reasons for medical consultation. 5% of the world population has symptoms associated with it and, after the age of 50, there is a 50% prevalence. Thrombosed hemorrhoids are the most serious form of this disease.

Although hemorrhoids are very common in adulthood, the thrombosed form requires immediate medical attention. The pain is so severe and stabbing that, in some cases, the patient can’t even sit up. If you’d like to get to know more about it, keep reading.

What are thrombosed hemorrhoids?

According to the National Library of Medicine of the United States, hemorrhoids are inflamed or swollen veins around the anus or the lower part of the rectum. Based on their location and symptoms, they’re differentiated into internal and external.

In general, the external ones cause more discomfort, but in both there’s superficial bleeding with the stools. As indicated by the Proctological Clinic , there are different degrees of hemorrhoids, from mild to thrombosed. Its characteristics are as follows:

Thus, a thrombosed hemorrhoid is one in which a blood clot has formed that prevents proper flow in the affected area. Faced with this medical condition, the only option is to seek professional help quickly.

According to the Colorectal Surgery portal, with thrombosed hemorrhoids, the patient suffers intense, continuous, stabbing pain. This discomfort is no longer related to defecation and the person who suffers from it can’t even sit up.

Before reaching this point, it’s possible to detect the disease based on other clinical signs, according to whether they have internal or external hemorrhoids. Some of them are the following:

It’s advisable to see a doctor for any of these symptoms in order to avoid hemorrhoidal thrombosis. Rectal bleeding may be due to hemorrhoids or something even more serious.

According to sources already cited, hemorrhoids occur when there’s too much pressure on the veins around the anus. The Mayo Clinic indicates that some of the causes are straining to try to empty the intestines, sitting for long periods on the toilet, being obese, and having a diet low in fiber.

On the other hand, relatively frequent events, such as hypertension or spending too much time sitting down at work, can be triggers. Hemorrhoids don’t arise from any one specific cause; in most cases they’re due to a set of simultaneous events.

How are thrombosed hemorrhoids diagnosed?

As indicated by the Health Library, the professional proctologist will examine the patient’s anus and rectum using a proctoscope. This device is a short metal tube (6 inches long) that’s lubricated and inserted into the rectum.

The approach can be surgical and non-surgical. We review each of the possible options in the following lines.

As indicated by the aforementioned portals, milder cases require a conservative approach. If the clot has formed more than 72 hours ago, the doctor will prescribe self-care for the patient in their own home. This consists of:

The surgical approach is divided into two: thrombectomy and hemorrhoidectomy. The first of the procedures consists of draining the thrombus of the external hemorrhoid. A surgeon will carry this out through an incision under local anesthesia, on an outpatient basis.

The chances of relapse are high. In a hemorrhoidectomy, the surgeon will remove the hemorrhoids. It can be carried out on an outpatient basis or require hospital admission, always under local anesthesia and with medical assistance. This is the most indicated and appropriate treatment in most cases, as it effectively ends the problem.

In many cases, preventing hemorrhoids is simply not possible. Human beings are quite sedentary nowadays, as many jobs involve prolonged activities (more than 7 hours) in the same position in front of a computer. Whatever the case, you can follow certain tips to avoid a thrombosed hemorrhoid or, failing that, its appearance. Some of them are the following:

You may like to read: The Difficulties of Obesity During Pregnancy

Pay attention to blood in the stools

Thrombosed hemorrhoids are a rare complication, as this condition remains in a mild, yer bothersome, form most of the time. However, in the event of any symptoms, it’s best to see a doctor promptly. If you have reddish blood with your stools or you need a lot of effort in order to defecate, then we recommend that you go to a nutritionist. Only then can you avoid complications.

7 Recommendations You Should Follow if You Want to Get Rid of Hemorrhoids
The consumption of fiber and water assist bowel movements, so it will help us to get rid of hemorrhoids by preventing straining and avoiding their appearance Read more »
Link copied!
Interesting Articles
Diseases
Symptoms, Causes, and Treatment of Tonsillopharyngitis

Tonsillopharyngitis is a common condition that consists of an infection of the pharynx and the tonsils. The vast majority of…

It's important to talk about cancer in order to discuss hormonal therapy. This is because this kind of disease encompasses…

Diseases
The Connection Between Oral Health and Fertility

Oral health is much more important than it seems and is apparently connected to fertility. As we'll see, its decay…

Major neurocognitive disorder, also known as dementia, is a condition in which higher brain functions are impaired as a result of neuronal damage. Over time, the patient will lose their autonomy…

Diseases
The 5 best remedies to cure back herpes

Herpes on the back is not only an aesthetic problem. This pathology can have different causes and symptoms depending on…