What Science Says about Caffeine

There are divided opinions on caffeine consumption. However, scientific studies have determined that, in most healthy adults, a moderate consumption has positive effects. In this article, discover what science says about caffeine. 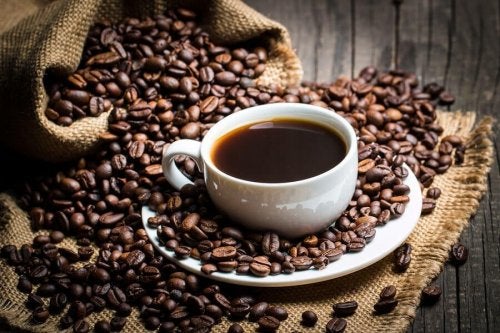 There’s a lot of both public and scientific interest in the adverse health effects of the regular consumption of caffeinated beverages. Find out what science says about caffeine!

The research hasn’t been totally conclusive. Only one cause-effect association related to caffeine consumption on negative outcomes during pregnancy is known.

What science says about caffeine, especially through epidemiological studies, is that this substance has a beneficial effect regarding the reduction of the risk of chronic diseases.

But, to understand the health effects of caffeine, you first need to know where this active compound comes from.

Where does caffeine come from?

Caffeine is the most-consumed stimulant throughout the world. Its main sources are:

In addition to the above sources, you can find caffeine in some painkillers, carbonated and energy drinks, and dietary supplements.

Once ingested, the body rapidly and completely absorbs caffeine in the gastrointestinal tract (the bioavailability is 100%). Then, it metabolizes it in the liver and forms three important metabolites:

What does science say about caffeine once it’s absorbed? This compound exerts physiological effects on the body. Below, we detail all of them.

You should also read: Is Caffeine Consumption Safe during Pregnancy?

Firstly, caffeine works as an antagonist to the adenosine receptor in the brain. This is because, since it has a similar molecular structure to adenosine, it has the ability to occupy its receptors (mainly A1 in the hippocampus and A2, located in dopamine-rich brain areas).

By blocking adenosine binding in neurons (which induces sleep), it stimulates central nervous system (CNS) activity. In general, a low consumption of this substance (between 20 and 200 mg per day) produces positive effects on well-being, alertness, and energy.

However, higher doses can trigger nervousness and anxiety, especially in people who aren’t used to drinking caffeinated drinks.

Parkinson’s disease manifests after the progressive reduction of dopaminergic neurons in the substantia nigra.

By improving the performance of the dopaminergic system, thanks to its antagonistic effect on adenosine receptors, caffeine stimulates the release of dopamine, reducing the deterioration of fine and gross motor skills.

Caffeine consumption on obesity and diabetes

What science says about caffeine and its effect on weight loss is very interesting. In this regard, this substance acts on the metabolic rate, energy expenditure, and thermogenic activities (especially on lipids).

Consuming 300 mg a day of caffeine inhibits the AMP-phosphodiesterase cycle to increase cyclic AMP and, by antagonizing adenosine receptors, it increases the release of norepinephrine. These are effects that induce weight loss by increasing lipolytic activity.

The effect of caffeine on mineral absorption

When you consume a drink that contains caffeine with main meals, it’s difficult for your body to absorb important minerals such as iron and calcium.

Some cohort studies have reported that high doses of caffeine increase urinary calcium excretion. Thus, they increase the risk of bone diseases. Therefore, experts recommend moderating your caffeine consumption to:

Note: You have to complement these recommendations with an adequate calcium intake.

Caffeine in pregnancy and lactation

The reason why caffeine is contraindicated during pregnancy and lactation is because it has the ability to cross the placenta and stimulate the fetus’ metabolic rate.

During pregnancy, high doses of caffeine are associated with the development of congenital abnormalities, miscarriages, low birth weight, and changes in the newborn’s behavior.

What science says about caffeine and its impact on health

In short, experts know the impact caffeine has on the body. As the most-consumed beverages in the world contain this substance, it’s important to know the mechanisms and effects it exerts on the body, as well as the recommended doses to avoid alterations and take full advantage of its benefits.

Most human studies suggest that a moderate consumption (less than 400 mg/day) has effects on body weight and neurodegenerative and metabolic diseases.

However, it’s important to note that this substance is contraindicated during pregnancy and lactation and, likewise, it’s convenient to control its diuretic effects.

5 Best Tips to Stop Drinking Too Much Coffee
Drinking a cup of coffee every morning is a habit for many people. However, the problem is when you drink too much coffee. Read more »
Link copied!
Interesting Articles
Nutrition
Is Red Meat Bad for Our Health?

Nutrition
The Reasons Why Some People Are Always Hungry