What Is Valproic Acid Used For?

Valproic acid is a drug that requires a prescription, mainly indicated for the treatment of different types of epilepsy. However, it's also used to treat bipolar disorder in certain situations. 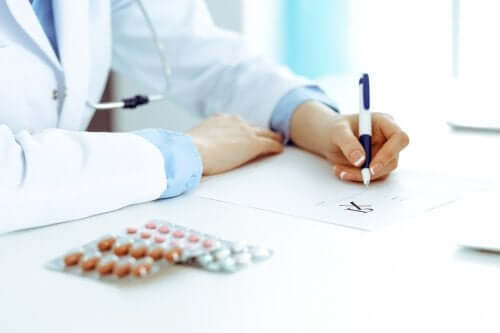 Valproic acid is a drug used primarily to treat epilepsy. Doctors normally use it to treat generalized or partial epilepsy.

In addition, they use it to treat manic episodes in bipolar disorder when lithium isn’t an option, not tolerated, or if the patient doesn’t respond adequately, such as in patients with mixed manic episodes.

Let’s take a closer look at these two diseases for which you can use valproic acid.

Epilepsy is a chronic disease with recurrent critical episodes: epileptic seizures. These seizures are excessive discharges with a sudden onset and end, which are triggered in an uncontrolled manner by a large number of neurons.

These discharges are the clinical expression of a functional change in the brain due to a cortical neuron disorder that causes, at the same time, several abnormal discharges at a certain point in the central nervous system (CNS) called the epileptogenic focus.

Likewise, experts believe that epilepsy is caused by neuronal depolarization/repolarization, that is, electrical changes in the membrane of these cells. However, there are several hypotheses about the causes of epilepsy. Here are some of them:

What about bipolar disorder?

As we’ve mentioned, the main use of valproic acid is to treat epilepsy. However, doctors often use this drug for patients with bipolar disorder in whom first-line treatment for bipolar disorder doesn’t work.

One adult in every 100 suffers from this disorder. It usually begins during or after adolescence. Additionally, it affects women and men equally.

Bipolar disorder, as its name suggests, is characterized by sudden mood changes. These changes usually last for several weeks or months and are beyond what healthy people experience. These changes are:

However, to this day, doctors don’t know the triggers of this disease. They believe it could be related to genetic factors, more than situational or learned behavior.

Also, there could be a physical disorder in the brain system that controls mood. This explains why patients can often control bipolar disorder with medication. Stressful situations or physical illnesses can also precipitate mood changes.

How does valproic acid work?

This drug is structurally related to GABA and has multiple mechanisms of action, such as:

GABA, like other substances such as serotonin or adrenaline, is a chemical the body synthesizes and is responsible for transmitting signals from one neuron to the next one.

Depending on the neurotransmitter, it will transmit one type of signal or another, triggering a different signaling chain. In the case of GABA, it’s secreted –  it emits signals to inhibit or reduce neuronal activity.

Discover: Topiramate: Uses And Side Effects

Side effects of valproic acid

This drug, like others, also has a series of side effects that doctors must take into account when administering it. Due to this, doctors limit the use of this drug, since it causes liver toxicity and has side effects, including:

Likewise, doctors normally administer it, along with other antiepileptic drugs, in myoclonic epileptic patients, in childhood absence epilepsy, in infantile spasms, and in Lennox-Gastaut syndrome (a rare disease).

Valproic acid is a drug that requires a prescription, mainly for the treatment of different types of epilepsy. However, doctors also use it to treat bipolar disorder in certain situations. You should exercise caution while taking it as it’s not exempt from causing side effects.