What Is Strongyloidiasis and How Is It Transmitted?

Immunosuppressed patients are more prone to the complications of this disease. This includes people with HIV infection or those who are on steroid therapy. 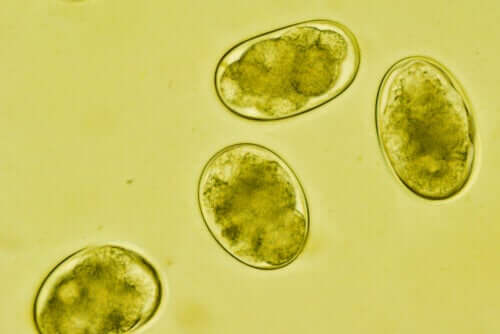 Strongyloidiasis is caused by Strongyloides stercoralis, a pathogen capable of reproducing within the human intestine. Although most cases are mild, it can be fatal in patients with a malfunctioning immune system.

It’s a public health problem in developing countries, although there are pockets of the disease all over the world. So you still want to learn a bit more? Keep reading!

What are its symptoms?

A patient with strongyloidiasis may have many different symptoms, many of which are nonspecific. Because of this, it will take some time for the doctor to make the diagnosis, unless the person comes from an endemic area.

Some of the most frequent symptoms are diffuse abdominal pain, bleeding through the stools, diarrhea, and occasional vomiting. Aside from issues in the digestive tract, general malaise, skin rashes, and unexplained weight loss may occur.

People with some degree of immunosuppression suffer more severe forms of the disease. We’ll discuss this in more detail later.

Infection by the parasite Strongyloides stercoralis is what gives rise to the disease. This type of microorganism is characterized by having several life cycles in which its form changes constantly – as long as there’s an ideal environment for its reproduction.

The surprising thing about S. stercoralis is that it can develop inside the human body. In order for the infection to continue for months or years, the patient doesn’t have to be continuously infected as the parasite reproduces inside the body.

The latter explains why many cases of the Strongyloides parasite in Spain are imported from other countries, as confirmed by a research study. Therefore, this is related to changes in living conditions in rural environments.

Outside the human body, the Strongyloidiasis parasite has the ability to live in the soil. So, it’s very common in communities where humans tend to defecate outdoors.

The most common route of entry into the body is through the skin, when people walk barefoot on contaminated soil. From there, the parasite passes into the bloodstream and respiratory tract.

It moves and continues its journey until it lodges in the digestive tract, where it finds ideal conditions for reproduction. Therefore, the most important risk factors for its acquisition are the following:

Physicians use several methods to make the diagnosis. Among them are the following:

There are several specific treatments for the disease, although doctors usually have to control the other diseases that can cause immunosuppression in a significant group of patients.

The most commonly prescribed drugs are the following:

Learn more about: Infectious Diarrhea: Everything You Should Know

When a patient’s immune system is compromised, parasite reproduction is greatly accelerated. This results in a phenomenon called hyperinfection syndrome, in which these organisms penetrate the walls of the intestine.

This way, they reach organs such as the brain, liver and urinary tract. Any of these forms is usually associated with diarrhea, severe pain, fever, and chronic weariness.

Clinical manifestations tend to appear after an episode of immunosuppression, such as corticosteroid use.

Few patients develop severe forms of this disease. In fact, many may be years without displaying symptoms, due to the parasite’s ability to lodge and reproduce within the human intestine.

Nevertheless, because of the potential negative health effects of severe cases, doctors recommend early detection of strongyloidiasis in some areas prior to initiating certain steroid treatments.

Other basic preventive measures include the use of special footwear for rural workers, proper personal hygiene, and instructing children about the risks of putting dirt in their mouths during outdoor activities.

Although most of the cases doctors report occur in developing countries, there are still endemic areas in developed countries. In conclusion, adequate hygiene promotion is usually sufficient to prevent strongyloidiasis. However, we always suggest seeking medical advice at the first sign of symptoms.

A Milk and Mint Remedy to Fight Intestinal Parasites
In this article, we'll share a surprising and effective remedy to fight intestinal parasites. With milk and mint, you can perform a natural treatment. Read more »
Link copied!
Interesting Articles
Health
Hormonal Changes in Menopause