What Is Sarcoidosis? Symptoms and Treatment

Sarcoidosis can be the result of an infection or an abnormal response of the immune system. People affected by sarcoidosis usually cough and have difficulty breathing. 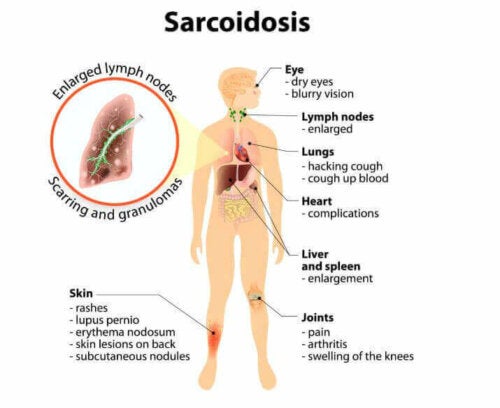 Sarcoidosis is a disease in which abnormal accumulations of inflammatory cells called granulomas form. It can affect many organs, but it affects the lungs and lymph nodes most of all.

Those affected by sarcoidosis usually cough and have difficulty breathing. However, symptoms can vary, depending on which organs are affected.

Sarcoidosis can be the result of an infection. However, it can also appear due to an abnormal immune system response. This disease usually appears in people between 20 and 40 years of age. In addition, it almost always happens during winter or early spring.

The symptoms of sarcoidosis vary depending on the affected area and the extent of the disease. They also depend on the age and sex of the affected person.

Some of the general symptoms are fever, tiredness, malaise, undefined chest pain, loss of appetite, and joint pain. However, depending on the location there are specific symptoms, which we’ll explain below.

A chest x-ray will show enlarged lymph nodes in the lung area near the heart. If the condition is severe, the lung ends up overloading the right side of the heart and causing right heart failure.

Sarcoidosis on the skin

When sarcoidosis affects the skin, a red rash appears on the shins. Fever and joint pain normally accompany this symptom.

A high percentage of people with sarcoidosis have granulomas in the liver. However, people with this condition usually don’t experience any symptoms. For this reason, the liver appears to function normally, but blood tests will provide data on the degree to which the liver is affected.

If sarcoidosis affects the eyes, it causes redness and pain. In addition, prolonged inflammation ends up obstructing the drainage of the eye’s internal fluid, causing glaucoma.

Granulomas that form on the heart can lead to heart palpitations, dizziness, or heart failure.

Joints and muscles with sarcoidosis

Inflammation from sarcoidosis causes widespread joint pain. Generally, the wrists, elbows, knees, and ankles are the most affected joints.

In some cases, this condition affects the cranial nerves. When this happens, you might experience symptoms such as double vision, hearing loss, and partial facial paralysis.

It can also increase calcium levels in blood and urine. This is because granulomas produce activated vitamin D, which improves calcium absorption.

High calcium levels cause loss of appetite, nausea, vomiting, thirst, and excessive urination. However, you have high calcium levels for a prolonged period, your body can form kidney stones. This can end up causing chronic kidney disease.

Most people with this condition don’t need treatment. However, if needed, doctors can administer nonsteroidal anti-inflammatory drugs to relieve pain and fever.

Doctors use corticosteroids to treat cases of sarcoidosis that cause choking, joint or chest pain, and fever. In addition, they use them when you have high levels of calcium and deforming skin lesions. Likewise, doctors often use them if you have impaired liver, cardiac, and nervous system function.

About 10% of people affected by sarcoidosis don’t respond to treatment with only corticosteroids. In these cases, doctors use methotrexate. In some cases, if corticosteroids are ineffective or cause unpleasant side effects, doctors administer immunosuppressant drugs.

In addition, it can also be effective when you have painful inflammation of the lymph nodes. On the other hand, if sarcoidosis affects your heart, you may need a pacemaker.