What Is Multiple Myeloma?

Multiple myeloma is a type of cancer. As such, it represents a serious health risk for those who suffer from it. Its diagnosis is sometimes difficult and late. In this article, we'll tell you where it originates and how it's first suspected. 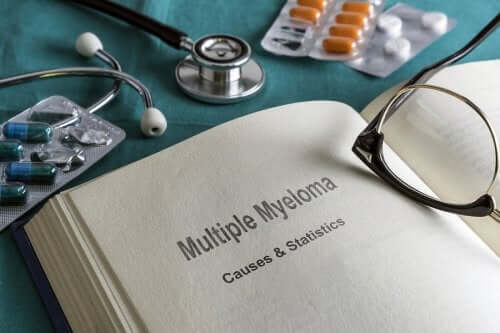 Multiple myeloma is an oncologic disease; in other words, it’s a human cancer. It originates in the bone marrow which is the tissue that forms the blood cells that will later circulate throughout the body.

The bone marrow is found inside the bones of the body and, from there, originates cells that are transferred to the blood tissue. Among these cells, one variety are the plasma cells. These are the culprits of multiple myeloma by multiplying abnormally in excess.

Under normal conditions, plasma cells have the function of fighting infections. They accomplish this task through the production of substances known as antibodies. Antibodies recognize the infectious agents that are trying to make humans sick and attack them.

In multiple myeloma, as there’s an abnormal amount of plasma cells, and, in turn, there’s also an abnormal production of antibodies. This doesn’t generate greater defenses; on the contrary, it favors infections and the complications derived from them.

There are a number of factors that make it more likely for a person to develop multiple myeloma. Among them we can name the following:

Sometimes the diagnosis of multiple myeloma is delayed because of nonspecific symptoms. However, this is a disease in which most of the signs can be confused with other diseases. If the physician doesn’t have a clear suspicion, or doesn’t detect something unusual in the complementary methods, there’s a risk of delay.

Among the most common symptoms, we can list the following:

The first step in diagnosing multiple myeloma is to suspect it. This is very difficult because of the non-specific symptoms of the disease. On the other hand, the results of a laboratory test requested for another reason may guide the physician’s suspicion.

The laboratory test par excellence is the search for the monoclonal antibody. This is an abnormal protein that has been named the M protein and, if it appears, it’s indicative of multiple myeloma.

The second step in the diagnostic process is the bone marrow biopsy. This involves taking a portion of the bone marrow, extracting it from inside a bone to examine that tissue under a microscope. Thus, it’s possible to closely observe the condition the plasma cells are in.

The sample taken is also usually subject to the following tests:

The treatment of multiple myeloma requires a multidisciplinary approach involving different specialists. The oncology team treating these patients includes hematologists and, when possible, hematologists with experience in this oncologic disease.

Radiotherapy is one of the therapeutic options. Multiple myeloma is sensitive to medical radiation, which can reduce the extent of the disease and also control the bone pain generated by the disease.

Chemotherapy is indicated in people where multiple myeloma has progressed. Unfortunately, survival rates are low in patients undergoing chemotherapy. It’s estimated that at more than five years, less than one-third of patients survive.

Lastly, a treatment that’s very effective, and that has many scientific studies to support it, is transplantation. In this case, doctors perform bone marrow autotransplantation.

Multiple myeloma is a serious disease. Like all cancers, it requires a timely diagnosis to improve the chances of survival. So, if you have symptoms that make you suspect it, or a family history of the disease, it’s best to consult with an expert and clear up any doubts.

In conclusion, when facing any suspicions, medical professionals can guide the diagnostic process to perform the necessary tests. If necessary, they can order the best available treatment which is continually being studied and reviewed. Remember that routine check-ups are also helpful in these types of diagnoses.

Cancerous Cells: All You Need to Know
Cancerous cells present mutations in their DNA--changes that alter the genetic material present in each one of them. Read more »
Link copied!
Interesting Articles
Illnesses
Can Celiac Disease Cause Infertility?