What is Momnesia in New Mothers?

"What was I going to do in the kitchen?" "I didn't know what to say." "Where are my keys?" These kinds of memory lapses are normal during pregnancy and after delivery. But what is "momnesia," anyways? 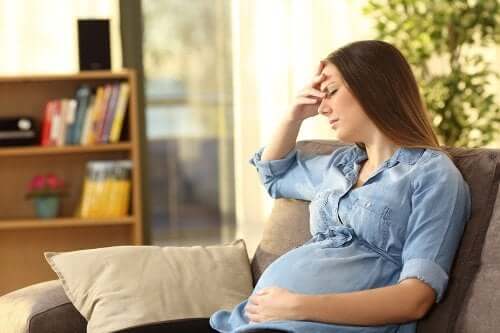 Many women complain about their memory loss when they get pregnant. However, is “momnesia” (a form of amnesia that afflicts new mothers) a myth or a reality?

There’s various published research that points out the existence of changes in the brains of future mothers. These restructurings begin during pregnancy and are still present two years after delivery.

However, is it true that there’s such a thing as momnesia?

A large proportion of pregnant women say they’re more forgetful than usual. There are certain situations that these women point to as “common” during the second and third trimesters of pregnancy. These include, for example, losing their cell phone or their keys, forgetting to buy things, forgetting cooking food, missing appointments, etc.

OK, but, that can happen to anyone, right? How does that prove that some memory lapses are due to pregnancy?

Well, the term momnesia wasn’t coined by science, but it does make its rounds in mommy circles.

Also, some doctors do admit that there are women who may temporarily lose their memory during and after pregnancy. This could be related to their hormonal changes. Perhaps they’re just worried about everything that has to do with their pregnancy, and thus they leave all minor issues in the back of their mind.

Also, the exhaustion of new mothers could have something to do with postpartum forgetfulness.

A decrease in the Gray Matter of New Mothers

According to a study by the University of Deakin in Australia, published in the Medical Journal of Australia, there’s definitely cognitive impairment during pregnancy. Researchers reviewed 20 studies that compared the cognitive functions of 709 pregnant women with 521 non-pregnant women. They determined that pregnant women had poorer cognitive and memory functions than those who weren’t pregnant.

In any case, there’s still more research that needs to be done before one can claim that there’s scientific backing behind the concept of momnesia.

While more research is needed to corroborate or deny the existence of momnesia, a 2010 study suggests that hormonal changes could be responsible for the decline in the memory of a new mother.

These hormonal modifications would help the mother adapt to the requirements of keeping her child alive and healthy. The fact that the brain selects the weakest connections and eliminate them to focus on what’s really important: her emotional connection and response to a baby’s needs.

Also read: Women Need a Year to Recover After Childbirth

As you can see, there’s no conclusive scientific evidence to claim that pregnant women and new mothers have a decrease in memory, as a general rule. However, many women say it’s so.

Data from another study does support the hypothesis that pregnancy affects a woman’s ability to perform certain tasks….specifically, the ones related to spatial memory. Such forgetfulness could have something to do with the high levels of prolactin and progesterone in the body of a mother-to-be.

Let’s see some common situations that usually happen to those afflicted by momnesia. They could be related to the difficulty in spatial memory that we mentioned above:

Momnesia in New Mothers: How to Cope

If you feel that you’re more forgetful since you got pregnant, don’t worry! Momnesia happens to many women. To tone it down, we advise you to:

Do you feel identified with any of the examples we gave above?

If so, then you probably have a case of momnesia! Science may have not yet endorsed the term and the data may be inconclusive. However, it’s a reality for many women and they’re sticking with it.

What do you think?

Tips to Manage Postpartum Depression and Stress
Postpartum depression affects more than 15% of women. Therefore, it's vital to follow some basic self-care guidelines during and after your pregnancy in order to prevent and treat it. Read more »
Link copied!
Interesting Articles
Pregnancy
Is it Risky to Tan During Pregnancy?

Motherhood
The Habits You Should Instill in Your Children

One of the biggest challenges parents face is instilling habits in their children to help them become good people. You…