What is Levodopa for?

Levodopa belongs to the drug family of antiparkinson agents. It exerts its action in the central nervous system by turning into dopamine in the brain. 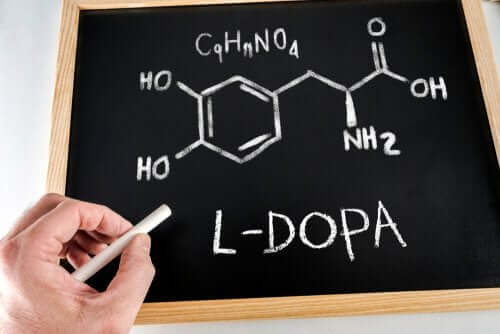 Levodopa is the main treatment for Parkinson’s disease. However, doctors often prescribe it in combination with other dopa-decarboxylase inhibiting drugs such as Carbidopa and Benserazide.

To begin with, Levodopa belongs to the drug family of antiparkinson agents. It exerts its action in the central nervous system. It does so by turning into dopamine in the brain.

The first person to associate Parkinson’s disease with a dopamine deficit was the biochemist Oleh Hornykiewicz. He examined the autopsies of people who died from Parkinson’s and suggested there was a relationship. Later, Oleh began treating patients with a racemic mixture of DOPA. The results were positive.

Not long afterward, Curt Porter, another scientist, showed that the L-DOPA stereoisomer was the active one. Thus, this finding meant only half of the dose was effective.

Later, they began to synthesize different molecules, such as Benserazide and Carbidopa. These improved the results of treatment. Plus, by using them, they also reduced the amount needed to obtain the desired effect.

Parkinson’s is a central nervous system disease caused by a deficit of dopamine, a neurotransmitter in striated neurons. It occurs due to the death of nigrostriatal neurons. The origin of this disease is multifactorial and there’s a high prevalence in the general population.

The elderly population is the most affected group. However, it only affects about 2% of those over 65 years of age. Nevertheless, it can also appear in young people.

Tremors are the most common symptom of Parkinson’s and it’s present in over 60% of people diagnosed with this disease. However, there may be other motor symptoms such as:

Other symptoms that may appear with the course of the disease are:

Likewise, we know there’s a link between this disease and an increase in the alpha-synuclein protein. There’s also a connection between the latter and Alzheimer’s. Thus, the therapeutic strategy currently under investigation is to administer inhibitors of alpha-synuclein aggregation or immunization for these protein derivatives. Also, there’s a study with Nilotinib that’s investigating this type of therapy.

Parkinson’s drug therapy consists of trying to increase dopamine levels by acting directly on the receptors. It either inhibits the degradation of the neurotransmitter or the LAAD, which is the enzyme that converts DOPA into dopamine.

In this sense, you may wonder why dopamine isn’t administered directly to a patient. The problem is its high reuptake and metabolization because it prevents absorption. Also, dopamine is a water-soluble molecule. Therefore, it’s unable to cross the blood-brain barrier that protects the brain.

For all these reasons, the current treatment for Parkinson’s is Levodopa, a dopamine precursor. This substance crosses the blood-brain barrier and turns into dopamine once it reaches the central and peripheral nervous system.

However, although Levodopa can efficiently cross the blood-brain, it also has a strong metabolism at the peripheral level. So, the amount that reaches the brain is very small. To solve this problem, doctors administer it together with other drugs that inhibit the LAAD enzyme. With this, it’s possible to inhibit the transformation of Levodopa to dopamine at the peripheral level and, ultimately, more of it reaches the brain.

The advantages of administering Levodopa along with LAAD inhibitors

The co-administration of LAAd inhibitors reduces the required amount of Levodopa by 75%. This is because they increase the half-life of the drug and contribute to maintaining stable levels in the brain.

Thus, its administration is more efficient as it manifests in faster action. Cardiovascular and gastrointestinal effects decrease by reducing the amount of dopamine in peripheral tissues. Consequently, the administration of Levodopa in combination with Benserazide or Carbidopa is quite common.

Levodopa is the first line of treatment against Parkinson’s disease. Doctors prescribe it along with other drugs to increase its effectiveness.

Consult your doctor or pharmacist with any questions you may have about this disease and its treatment. Also, make sure to ask them about the latest advances and clinical trials currently available.

Rasagiline and its Use in Parkinson’s Disease
Rasagiline belongs to the family of irreversible inhibitors of the enzyme monoamine oxidase. People either use it by itself or as adjuvant therapy. Read more »
Link copied!
Interesting Articles
Medication
Characteristics and Uses of Flumazenil