What Is Ischemic Heart Disease?

Ischemic cardiopathy is a serious disease which consists of insufficient blood flow to the heart. In this article, we'll tell you more about it. 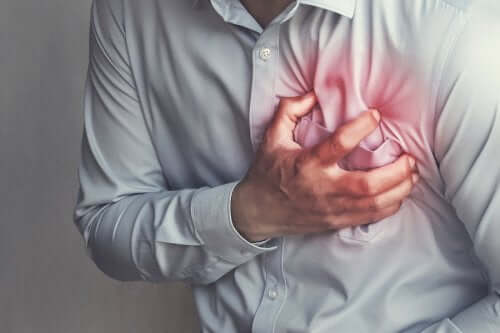 Coronary heart disease is known as ischemic heart disease. As its name indicates, the underlying process that causes the problem is ischemia, or lack of blood flow to the heart.

The most common cause by far is arteriosclerosis. When small and large plaques of fat form on the walls of the arteries that supply blood to the heart, then the flow to the heart decreases. As a result, the heart lacks the oxygen it needs to work.

In ischemic heart disease, the arteries that become clogged or decrease their flow are the coronary arteries. These vessels are small tubes that carry blood to the heart muscle, known as the myocardium.

Atherosclerosis doesn’t happen overnight; on the contrary, it’s a slow process that takes years to form. During this period, traces of fat, cholesterol, collagen and some inflammation cells such as lymphocytes slowly accumulate on the walls of the arteries.

In developed countries, ischemic heart disease is the leading cause of death. Specialists estimate that out of every 10 people with this pathology, at least 5 have serious episodes, such as angina pectoris or acute myocardial infarction.

Although the ultimate cause of ischemic heart disease is arteriosclerosis, we know that there are factors that predispose to it. Certain natural conditions or life habits make the disease likely. A publication in the Electronic Medical Journal points out the following risk factors:

Also read: Cholesterol in Seafood: Does it Affect Your Lipid Profile?

Ischemic cardiopathy is silent and develops slowly and progressively until it manifests itself externally. It can manifest in three different ways we will now detail.

Stable angina pectoris is a pain in the heart area that becomes recurrent, that is, it repeats with similar intensities. The episode of pain doesn’t last long – 10 minutes on average – although for the patient it seems like an eternity. As detailed by Medline Plus, it’s an oppressive pain in the chest, as if someone else were squeezing the chest very hard.

Unstable angor pectoris is angina pectoris that has evolved and become unpredictable. It’s no longer always the same and repetitive chest pain, but appears at any time, even when the person is just resting.

According to a study published by the Cuban Journal of Biomedical Research, the pain is more intense and radiates from the chest to the left arm and neck. It’s the sign that warns the person that they may experience a heart attack. When doctors try to diagnose it, they may not find signs in the electrocardiogram.

Lastly, the most serious and potentially fatal episode in the context of ischemic heart disease is acute myocardial infarction. In this case, the pain in the chest is intense, to the point of being unbearable.

It’s prolonged and doesn’t subside, sometimes it goes on for as long as 20 or 30 minutes. Other symptoms accompany it, such as shortness of breath, sweating, vomiting and anxiety. It requires immediate medical attention.

The treatment for ischemic cardiopathy has three alternatives. These will depend on the clinical picture, on how advanced the obstruction of the coronary arteries is, and on the urgency. These alternatives are:

You should always visit your doctor to carry out the corresponding studies before the first symptoms of pain in the chest. Major complications can be avoided with early detection of the disease.

6 Types of Heart Disease and the Symptoms They Cause
In this article, we’ll explain six of the most common types of heart disease and their main symptoms. Read on to learn more! Read more »
Link copied!
Interesting Articles
Illnesses
Open-Angle Glaucoma: What Does it Consist Of?