What Is Horner's Syndrome?

Horner's syndrome is always caused by another disease the patient has suffered. Due to this syndrome, the most characteristic symptom is that the pupil on the affected side of the face contracts. 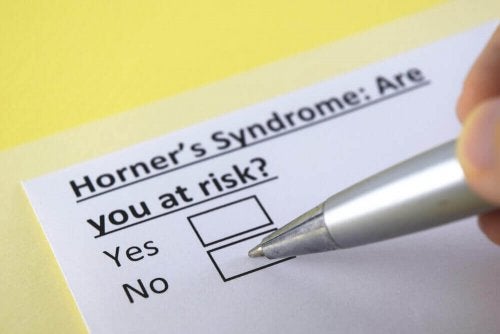 Horner’s syndrome is an uncommon disorder, known as oculosympathetic paralysis, in which the nerves of the eye and face are affected. Due to this syndrome, the pupil of the affected side of the face contracts. Likewise, the eyelid droops and sweating on that side decreases.

Horner’s syndrome always occurs as a consequence of an underlying disease. The most common disorders that normally develop from it are:

In certain situations, doctors might not be able to find the underlying condition that provokes it. In this case, it’s difficult to treat the syndrome, since treating the underlying cause is what could restore normal nerve functions.

You should keep in mind that Horner’s syndrome can occur in people of any age. Additionally, as we mentioned before, it’s not very common at all.

Why does it happen?

To understand why Horner’s syndrome happens, you have to look at the functioning of a series of nerve fibers, such as the fibers related to sweating, the pupils, and some muscles around the eyes.

These start in the part of the brain called the hypothalamus and go to the face and eyes. If the path of these nerve fibers is affected at any point then it gives rise to Horner’s syndrome.

The path these nerve fibers run is very complex. From the brain, they go down the spinal cord, they come out at chest height, and go back up through the neck next to the carotid artery. Then they go into the skull and arrive at the inside of the eye.

The damage caused to these nerve fibers can be caused by the following:

There are certain cases in which Horner’s syndrome develops at the moment of birth. This affliction can cause a lack of color and pigmentation in the iris. Although this syndrome doesn’t have many cases, the congenital syndrome is estimated to affect 1 of every 6000 births.

You should keep in mind that Horner’s syndrome only affects one side of the face. The most frequent signs and symptoms used to identify this affliction are the following:

These symptoms aren’t easy to detect. They can develop subtly, which complicates diagnosis of this syndrome.

In cases where Horner’s syndrome develops in children, there are a series of characteristic symptoms that you can observe. The iris of the affected eye becomes lighter in color, especially in children under one year old.

Additionally, the affected side of the face doesn’t get red. The kid’s face should redden naturally from physical effort, emotional reactions, or heat. However, in the case of Horner’s syndrome, it doesn’t happen.

Diagnosis and treatment of Horner’s syndrome

To diagnose the syndrome, professionals evaluate some of the following observable symptoms through an eye exam:

Treatment, as we mentioned before, depends on the original cause of the disorder. There isn’t a specific treatment for Horner’s syndrome. Doctors will proceed to treatment once they identify what caused it.

It’s worth mentioning that, when suffering this syndrome, the eyelid only falls a little. And this is the biggest obstacle to the patient’s daily life.

Additionally, there aren’t normally complications. Complications that can appear are often related to the underlying cause of the syndrome, or the treatment itself.

What is Tourette’s Syndrome?
People with Tourette's syndrome get nervous tics. They also are at higher risk of suffering from anxiety and depression, as well as obsessive disorders. Read more »
Link copied!
Interesting Articles
Illnesses
What Is Cyberchondria and How Do You Deal with It?