What Is Giant Mucinous Cystadenoma of the Ovary?

Usually, giant mucinous cystadenoma of the ovary doesn't present symptoms, except for the increase in the abdominal perimeter. In many cases it's mistaken for pregnancy. 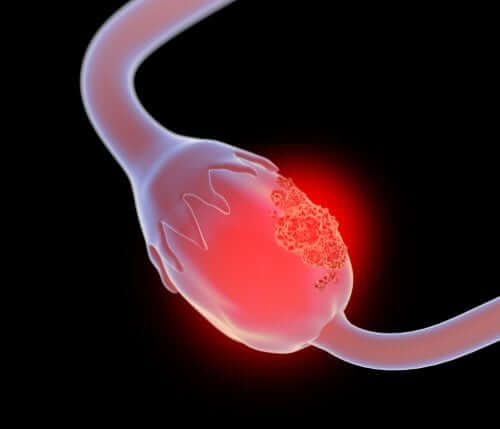 Giant mucinous cystadenoma of the ovary is a benign tumor in most cases, and it usually occurs in adult and middle-aged women. It’s very rare in young girls or teenagers.

Between 15% and 25% of ovarian tumors correspond to a mucinous giant cystadenoma of the ovary. Its main characteristic is the large size it can grow to. That explains the very name of it: giant.

Specialists estimate that about 85% of these tumors are benign. 6% are considered borderline, or with some malignant potential, and 9% are invasive tumors. Other classifications estimate that 75% are benign and the remaining 25% are malignant.

Generally, the benign type of giant mucinous cystadenoma of the ovary develops between the ages of 20 and 50. Malignant tumors usually appear after the age of 50. They’re often confused with pregnancy due to their size.

What is giant mucinous cystadenoma of the ovary

Giant mucinous cystadenoma of the ovary is defined as a neoplastic lesion. That is, as an indiscriminate cellular proliferation of a tissue that invades adjacent tissues. In this case, it’s derived from the epithelial cells of the ovary.

It originates from a metaplasia or transformation of the epithelium of the cells of the layer that covers the ovary, that is, the mesothelium of the ovary. Because of their characteristics, they have the potential to reach a large size.

Some giant mucinous cystadenomas of the ovary contain epithelial tissue of the intestinal type. These have a greater chance of being malignant and can eventually develop into ovarian cancer. Currently, 1 in 70 women develop this type of cancer during their lifetime.

The presence of several glands and cysts characterize giant mucinous cystadenoma of the ovary. These have a diameter of between 4 to 6 inches (10 to 15 cm) and are covered by epithelial cells with abundant amounts of mucin. This substance is the main component of mucous and salivary secretions.

The most relevant characteristic of this type of tumor is its potential to reach great size. In 1982, medical records documented the presence of a giant mucinous cystadenoma of the ovary that weighed 193 pounds (87.7 kilograms), the largest in the last 50 years. Mucinous cystadenomas weighing more than 26 pounds (12 kilograms) are classified as a giant.

This type of ovarian tumor has a circular shape, blue color, and smooth texture. They sometimes have a translucent appearance and have internal partitions. These are composed of a viscous and transparent liquid.

However, take note that the ovary never loses the possibility of generating tumors. For this reason, they can appear at any age in a woman’s life. Ovarian tumors are one of the most common neoplasms in women and are dangerous, since they aren’t detectable in the early stages.

The most common clinical manifestation is the increase in the abdominal perimeter. This is accompanied by an intra-abdominal mass, which is palpable to the touch. There is rarely pain or other manifestations, not even during the physical examination.

In some cases, the excessive growth of the tumor leads to torsion, hemorrhage, or rupture. This results in symptoms of abdominal distension, with oppressive pain in the hypogastrium and other gastrointestinal and urinary symptoms.

To confirm the diagnosis and establish the malignancy or benignity of the tumor, imaging tests are necessary. Usually, specialists perform ultrasound and computed tomography (CT) scans of the abdomen. Ultrasounds usually offer great reliability in this diagnosis.

When physicians suspect that there’s a malignant cyst but cannot verify it by imaging studies, specialists must perform an exploratory laparotomy. If the tumor is symptomatic, specialists must assess it as soon as possible.

You may be interested in: How is Ovarian Cancer Detected?

Clinical information indicates that the highest incidence of ovarian tumors occurs between women of 35 and 65 years of age. This stage corresponds to the climacteric, a phase in which the reproductive function undergoes multiple modifications.

Although some tumors are hormonally active, the vast majority generate only mild symptoms until they reach a large size. The benign forms, especially, tend to be asymptomatic and usually appear as an accidental finding.

The best treatment for giant mucinous cystadenoma of the ovary in elderly women is bilateral salpingo-oophorectomy (removal of the ovary and its fallopian tube) followed by hysterectomy. When the patient is a young woman, the treatment always preserves fertility. In general, the prognosis after surgery is very positive.