What Is Captopril and What Is It For?

The effects of captopril and thiazide diuretics are additive. The therapeutic effect is enhanced which leads to better results with their combination. Before starting treatment with captopril, the doctor needs to know the patient's previous antihypertensive treatments. 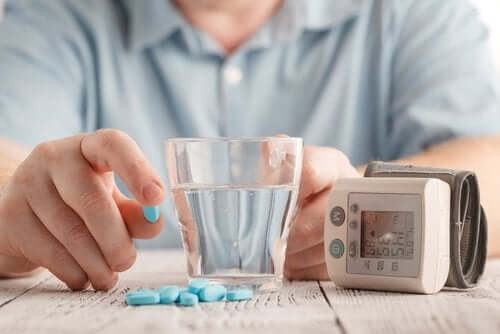 Captopril contains a drug that belongs to the family of angiotensin-converting enzyme inhibitors (ACE inhibitors). It acts by blocking the protein peptidase of the active center of this enzyme.

ACE is an enzyme that converts angiotensin I to angiotensin II, a molecule that exhibits potent vasoconstrictor effects and a subsequent increase in blood pressure, among other effects.

Indications and dosage of captopril

As we’ve mentioned, doctors mainly use this drug to treat hypertension. However, specialists also prescribe it to combat other diseases. Depending on the indication, doses and dosage will vary.

Let’s take a closer look at each of the main indications of captopril and the recommended doses for each of them:

To treat this disease, doctors can administer captopril in monotherapy or in combination therapy with other drugs indicated for the treatment of hypertension. Above all, they can administer them in conjunction with thiazide diuretics.

The effects of captopril and thiazide diuretics together enhances the therapeutic effect, obtaining better results.

Before initiating treatment with captopril, the professionals need to know the patient’s previous antihypertensive treatment, as well as blood pressure, dietary salt restriction and other clinical situations.

The initial dose is 50 mg per day. However, if after two weeks the clinical picture doesn’t improve, it can be increased to 100 mg daily or 50 mg twice a day. If the doctor administers it together with another antihypertensive drug, they’ll modify the doses as they deem appropriate for the patient’s safety.

Discover: What Is Ischemic Heart Disease?

Doctors also prescribe captopril to treat heart failure. In most clinical trials, researchers studied the effect of this drug when administered together with other agents. However, captopril doesn’t require the presence of concomitant drugs to be effective against this disease.

Regarding recommended doses, in normotensive or hypotensive patients who’ve already received treatment with diuretics and who may present a hypovolemic and/or hyponatremic state, an initial dose of 6.25 or 12.5 mg administered 3 times daily may minimize the magnitude or duration of the hypotensive effect.

However, for most patients with heart failure the initial daily dose is 25 mg three times daily. They should never exceed a maximum dose of 450 mg per day of this drug.

This is another indication for this ACE inhibitor. Specialists specifically indicate it for post-myocardial infarction after 72 hours of hemodynamic stability in patients who have had heart failure during the course of the disease or who have evidence of decreased ejection fraction.

In these cases, doctors should initiate treatment as soon as possible, starting within 72 hours of the infarction. They’ll start with an initial dose of 6.25 mg and increase it to 12.5 mg 3 times a day.

The doctor can increase the dose according to the patient’s tolerance to 25 mg 3 times a day, up to a dose of 150 mg once a day. If the patient presents symptomatic hypotension, the dose should be reduced.

You may also be interested in: What is a Myocardial Infarction?

Lastly, we want to mention another indication for this drug. It’s administered in insulin-dependent patients suffering from this disease. It doesn’t matter whether they’re normotensive or hypertensive. The aim of treatment with captopril in these patients is to prevent the progression of renal disease, as well as to reduce the clinical sequelae associated with it.

The recommended dose varies between 75 and 100 mg per day, divided into several doses. In the event that these doses aren’t sufficient to achieve the therapeutic objective, it can be associated with other drugs, such as:

In conclusion, doctors widely use captopril to treat hypertension. They also use it to treat other diseases, such as myocardial infarction or heart failure.

Due to its potent effects, it’s essential to always follow your doctor’s instructions and not to abuse this type of medication. You can consult both your doctor and your pharmacist if you have any doubts regarding this drug.

Discover How Smoking Affects the Heart
Tobacco is a risk factor for atherosclerosis. Today we'll tell you more about how smoking affects the heart. Read more »
Link copied!
Interesting Articles
Illnesses
What Are Autoinflammatory Diseases?