What is a Super-Spreader?

A super-spreader is a sick person who transmits illness more than the average infected individual. In this article, we'll discuss whey this happens, as well as its implications during a pandemic. 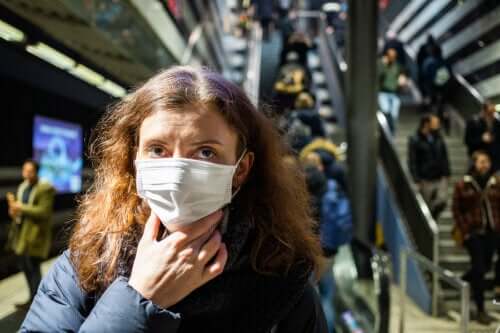 The coronavirus (COVID-19) outbreak continues to be a part of our present life. This situation is forcing us to become familiar with the different terminology that appears on the media. From virus detection tests, statistics, predictions, and all sorts of scientific concepts, we’ve had to interpret a great deal of epidemiological information. Meanwhile, now we’re going to take a look at one more concept: a super-spreader.

What does this term refer to? What role does it play in an epidemic?

Answering these questions is important to understand how these individuals contribute to the spread of a virus. Therefore, in the following paragraphs, we’ll go into detail regarding the meaning and implications of this term.

What is a super-spreader?

A super-spreader refers to a sick person that can infect more individuals than average. Let’s take a look at the following examples:

You may also want to read: A Study Confirms Three Types of Coronavirus in the World

Like any natural process, the importance of these subjects is governed by mathematical theorems. Therefore, we need to delve into the world of numbers and look at the Pareto principle.

To make this easier to understand, let’s look at the 20/80 rule. 20% of infected individuals cause 80% of infections. Clearly, not all cases of super-spreaders respond to this rule, but epidemiologists have observed this distribution in other epidemics.

Just the same, transmission by a super-spreader can take place even if it doesn’t obey the 20/80 rule. So, what gives super-spreaders their ability to infect so many others?

Different theories exist when it comes to how a patient can come to infect a disproportionate number of individuals. However, the exact cause remains a mystery.

Nevertheless, here are some of the current theories:

Both super-spreaders and normal infected patients suffered similar effects regarding fever and lung damage. Researchers only observed one difference: Super-spreaders had to stay in the hospital longer to overcome the illness.

Find out more: How Long Will a Coronavirus Vaccine Take?

Both the identification and the role of a super-spreader during a pandemic are parameters that are difficult to discern. Just the same, expert organisms emphasize the importance of identifying these individuals to prevent more contagion during a pandemic.

Respiratory Health in Times of COVID-19
Respiratory health is key in times of COVID-19 in order to get through this pandemic as best we can. Coronavirus is a virus that attacks the lungs and, therefore, caring for and protecting this organs is fundamental. Read more »
Link copied!
Interesting Articles
Illnesses
What Are Autoinflammatory Diseases?