What Is a Bronchoscopy and What Is It For?

A bronchoscopy usually lasts between 30 and 60 minutes, but it's a process that requires some preparation and subsequent recovery, at least for a few hours. In this article, we'll delve into its indications and associated risks. 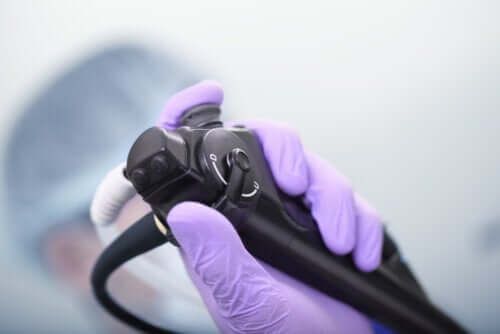 A bronchoscopy is a diagnostic test that medical experts have been using since the late 19th century. It lets us see the airway down to the largest bronchi. In addition, it can even be used to treat certain pathologies.

This technique has advanced notably over time. Doctors used to perform it with a rigid steel tube. However, nowadays they use a lengthened and flexible device which is easier to handle.

Bronchoscopies are one of the fundamental pillars in pneumology and are used very frequently. Therefore, in this article we’ll explain everything you need to know about the technique and how it’s performed.

A bronchoscopy, as we’ve pointed out in the introduction, is a procedure that allows the visualization of the airway. Medical experts perform it to diagnose or treat some respiratory diseases.

To do this, they use a bronchoscope. This is a tube that’s about 60 centimeters (24 in) long and it’s introduced through the nostrils or mouth. This tube consists of a kind of camera at the tip that allows you to see the inside the airway by showing what the camera records on a screen.

In addition to a camera, the bronchoscope allows doctors to introduce other elements into the area. For example, tools to obtain tissue samples or to extract some foreign body from the airway. Currently, the most widely-used bronchoscope is the flexible one.

It can reach more inaccessible parts of the bronchi and allows more movement. However, medical experts still use the rigid bronchoscope. Especially in cases of hemorrhage or when there’s a large foreign body in the airway.

What are the indications for a bronchoscopy?

A bronchoscopy is a technique that doctors often use to diagnose possible lung disease. This is why they usually perform it on people who have respiratory symptoms, such as coughing, difficulty breathing, or signs of infection.

It’s generally used when other diagnostic tests have failed to find the cause of the underlying pathology. In addition, it’s important to emphasize that it’s also a therapeutic tool. Thus, its main indications are the following:

How is the procedure?

A bronchoscopy is an unpleasant technique for the patient. The procedure itself usually takes between half an hour and an hour. However, it requires preparation and subsequent recovery time, so it usually takes a bit more time.

To avoid complications, doctors often perform bronchoscopies under general anesthesia. Especially when they use the rigid bronchoscope, as it’s more uncomfortable. In other cases, physicians only administer tranquilizers for calmness and muscle relaxation.

Usually the patient sits or lies down on a stretcher. In order to perform the bronchoscopy, the heart rate and oxygen level must be controlled at all times. The medical expert can insert the bronchoscope through the nose or mouth. They should do it slowly, avoiding sudden movements.

In some cases, another tube is also introduced through which a saline solution is administered. This removes the mucus present in the ducts and medical experts can obtain better tissue samples. Sometimes, as we mentioned before,  the doctors introduce dilating devices called stents.

Once they’ve achieved the objective of the procedure, the doctors must remove the bronchoscope. To do this, they gently pull on the tube, removing it little by little.

You may like to read: How Contagious Is Bronchitis Exactly?

Recommendations before having a bronchoscopy

Although it’s true that doctors may perform them in an emergency situation, on many occasions they’re also a planned procedure. In these cases, it’s important to take into account all the recommendations the professional offers.

As it’s an intervention with a risk of bleeding, patients must usually avoid any anticoagulant medication days before the procedure. They should go into the clinic with comfortable clothes and with someone by their side.

Even though not all cases require a general anesthetic, the medication to calm the patient can leave them lethargic or groggy. For this reason, we recommend that someone accompanies the patient after the operation.

Most cases don’t require a general anesthetic, and so the person who undergoes this technique is usually awake and can help the doctors do their job. Therefore, the doctor is able to ask questions about any discomfort they may experience.

After the bronchoscopy, it’s important to have a period to rest and be monitored. In the following hours, complications such as bleeding may occur. That’s why it’s essential that the patient remains under observation for at least a couple of hours.

In addition, during this period, the effect of the anesthetic drugs wears off. Usually, the patient will begin to feel discomfort and numbness around this time. Doctors also recommend not eating or drinking anything in the hours following the bronchoscopy.

Most people experience some throat pain or a cough. However, if the patient has difficulty breathing, coughs up blood or has a fever, it’s  absolutely critical to see a doctor.

Risks of undergoing a bronchoscopy

Like any other medical intervention, bronchoscopy presents certain risks. However, complications are rare. In fact, most often they derive from the anesthetic rather than from the technique itself.

Children often undergo bronchoscopies. This is because it’s usual for them to ingest small objects that become lodged in the airway. That’s why it’s important to emphasize that, according to a study published in Pediatric Surgery, experts consider this technique to be safe and with great diagnostic cost-effectiveness at that stage of life.

According to Mayo Clinic, the possible risks of this intervention are bleeding, lung collapse, and fever. Bleeding is usually self-limiting and tends to resolve on its own. Collapsed lung occurs when the bronchoscope punctures the lung and air collects around it.

Keep reading: Are There Bacteria in the Lungs?

Bronchoscopies are an essential technique in pneumology

Bronchoscopies are relatively simple procedures that provide great diagnostic and therapeutic advantages. This procedure doesn’t usually cause complications and, in most cases, doctors perform it without a general anesthetic.

It’s one of the most important techniques when it comes to diagnosing cancer. It’s also very useful in pediatrics, since children usually ingest small objects that get stuck in their airways. In addition, bronchoscopies allow doctors to perform more and more therapeutic actions.

A critically burned patient experiences a number of symptoms that create an energy deficit, due to a negative balance of…