What Can Cause Discharge During Pregnancy and How To Treat It

During pregnancy, changes in your body can cause surprises and create worries. Therefore, it's better to be prepared and know what to expect. 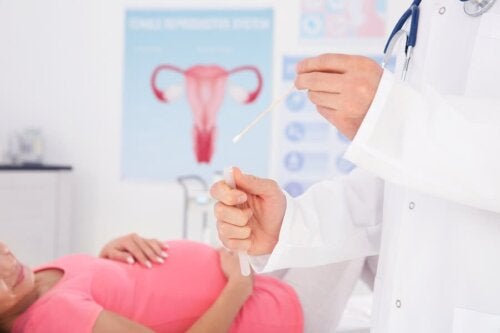 From the moment a woman gets pregnant, her body begins to undergo great changes. One of the first you might notice is the increased discharge during pregnancy. This, though, is normal and generally doesn’t indicate a problem. The causes can vary and, in some cases, can be an indication of some sort of complication.

Leucorrhea, also known as increased vaginal discharge during pregnancy, is a thick, white to clear, milky cervical mucus that starts to appear just two weeks after the egg is fertilized. Placental hormones produce this fluid to protect the cervix.

As the weeks go by, the discharge during pregnancy increases and becomes more noticeable in the last few weeks before delivery. This is because the baby begins to press with its head, pushing the cervical fluids.

When should you worry about discharge during pregnancy?

When the vaginal fluid has other characteristics during pregnancy, it may be due to some problem. In these cases, you should always consult with the gynecologist.

Vaginal infections are common during pregnancy, especially after the second trimester. When they happen, the discharge is greenish or yellow, has a strong odor, and may be accompanied by irritation and an itching sensation. It can also burn when you urinate or have sex.

Vaginal infection or candidiasis is caused by an imbalance in the pH levels of the mucosa, which favors the development of the fungus called Candida (a type of yeast). Also the high sugar levels in normal vaginal fluids create an environment conducive to the fungus.

Although vaginal infection doesn’t represent any danger, we recommend you go to the doctor as soon as possible to start treatment. If you don’t treat it, you may pass the infection to the baby during delivery.

During pregnancy, the most common treatment is with creams and suppositories, as scientists aren’t sure of the effects that oral medications have on the fetus.

Read more: 6 Questions You Should Ask Your Gynecologist

Bacterial vaginosis and discharge during pregnancy

This happens when the population of bacteria in the vagina increases to higher than normal levels. The exact cause of bacterial vaginosis is unknown, but it’s believed that it can be triggered by sexual intercourse. Although not very common, approximately 10% of women suffer from it.

Bacterial vaginosis doesn’t always have symptoms, but sometimes it produces a grayish, fishy-smelling fluid. Generally, doctors do several tests during pregnancy to determine if you have bacterial vaginosis.

This infection can cause premature births and even miscarriages. Doctors usually treat it with oral or cream antibiotics.

If you have a sexually transmitted disease such as gonorrhea, chlamydia, syphilis or trichomoniasis, it also causes vaginal fluids to be produced. In these cases, they are usually yellowish or greenish and have strong odors.

These diseases can cause premature births and miscarriage, and can also be transmitted to the baby during childbirth, sometimes with serious consequences for their health.

When the placenta blocks the cervix in the lower uterus during the last few weeks of pregnancy instead of moving into the womb, what’s known as placenta previa occurs.

This condition can cause abnormal bleeding during pregnancy and at delivery. A placenta previa is usually detected by routine ultrasound scans beginning at 20 weeks of pregnancy.

In general, women who have placenta previa should continue the pregnancy in bed and with more frequent checkups than normal. In extreme cases, it might require hospital rest or an early delivery by Caesarean section.

How to manage the flow in pregnancy?

In normal cases of leucorrhea, there isn’t much you can do to avoid it. However, we recommend you put more care into your genital hygiene to avoid other complications.

Finally, you should notify your doctor as soon as possible if you notice any changes in the amount, color, and smell of the discharge during pregnancy.

5 Ways To Increase Folic Acid Intake During Pregnancy
In this article, you'll discover how to increase your folic acid intake during pregnancy. Of course, you should talk to your doctor before making any changes to your habits. Read more »
Link copied!
Interesting Articles
Pregnancy
Do Home Pregnancy Tests Work?