What Are the Symptoms of Leptospirosis?

Zoonitoc diseases are those the spread from animals to human beings. Among these, leptospirosis is the most widespread in the world. So, what does this disease consist of? And what are the symptoms of Leptispirosis? Find out today! 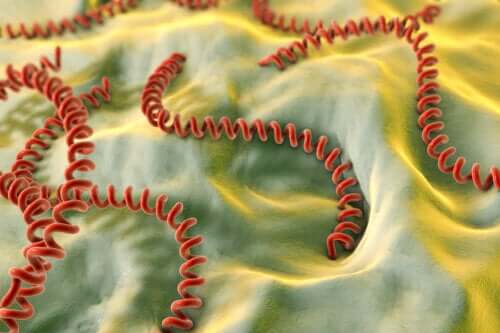 Zoonotic diseases are those that spread from animals to human beings. Among these, leptospirosis is the most widespread in the world.

So, what does this disease consist of? And what are the symptoms of leptospirosis?

In this article, we’ll take a look.

A little about Leptospirosis

Leptospirosis is a zoonotic disease that develops due to an infection by a bacteria known as leptospira. According to information published by the Panamerican Health Organization (OPS), each year, there are approximately 500,000 cases around the world.

The spread of this bacteria from one human to another is uncommon. In general, infection occurs when humans come in contact with the urine of infected animals or with environments contaminated by it.

To find out more about the origin and the symptoms of listeriosis, keep reading.

Understanding the pathogen that causes leptospirosis

First of all, it’s important to understand the microorganism that causes this illness. We’re talking about a bacteria called leptospira interrogans, which belongs to the order Spirochaetes.

Given its elongated, twisted form with hook-shaped flagellum on both extremes, it’s easy to confuse them worms under a microscope. However, they’re actually prokaryotic organisms or, in other words, they possess only one cell. Therefore, their structural complexity is less than that of an annelid.

Wild mammals, such as beavers, foxes, and raccoons are the main reservoirs of the leptospira bacteria. The transmission is simple and occurs when a wound or mucous membrane comes into contact with the urine of an infected animal.

This sort of contact may seem unlikely. However, in tropical countries, urban rats and mice can come to infect domestic animals, who then pass it on to humans.

Therefore, human beings can be accidental hosts of this parasitic bacteria. In other words, the microorganism is unable to continue its development in human hosts but can still cause illness.

Find out more: The Differences Between Viruses and Bacteria

The origin of leptospirosis

As we already mentioned, the chances of contracting leptospirosis in infected regions are high. That’s because it spreads through urine and can remain active in water or on land for more than four weeks.

According to information published in the U.S. National Library of Medicine, people can contract this illness by coming into contact with water or land that contains contaminated urine. At the same time, there’s also the risk of direct contact with infected animals.

Once the bacteria enter our bodies through our mucous membranes or superficial wounds, it multiplies transiently in diverse parts of the body. Finally, it settles definitively in the liver and kidneys.

The clinical presentation and symptoms of leptospirosis

The incubation period of this disease tends to be between seven and twelve days. During this first stage, the symptoms of leptospirosis are similar to those of the common cold. Depending on the severity of the infection and the serotype of the bacteria, the illness can last over time with more severe symptoms.

More serious symptoms of leptospirosis may include the following:

The illness can last from anywhere between a few days and a few weeks, depending on the seriousness of each case.  However, for peace of mind, it’s important to know that most patients that receive this diagnosis don’t go beyond the first phase.

In these cases, the symptoms of leptospirosis are mild. In fact, some cases are altogether asymptomatic.

People with a weakened immune system, the elderly, and those with associated pathologies tend to be more vulnerable. That’s because the bacteria have more freedom to reproduce, making it difficult to eliminate.

At this point, you may be asking yourself which groups are most likely to contract this illness. To answer your question, communities in low-income countries with access to infected water are most at risk.

You may also want to read: 10 Things In Your Home You Aren’t Cleaning Enough

Should I worry about the symptoms of leptospirosis?

In principle, you don’t need to worry about leptospirosis. It’s true that this zoonotic disease is very widespread and affects developing countries as well as developed countries. However, it’s incidence is higher in tropical regions where water supply controls are lacking.

On an individual level, those who are more at risk include people that work with livestock of wild animals, farmers, etc. However, by practicing a series of precautions, they can safeguard themselves against infection. After all, the bacteria can’t enter the body without dirty hands coming into contact with mucous membranes, or by drinking contaminated water.

Discover 6 Travelers’ Diseases
Many of the endemic diseases of tropical countries are spreading as travelers’ diseases. This is due to the fact that many more people are traveling. Read more »
Link copied!
Interesting Articles
Illnesses
Diabetes in Children and Adolescents

Interesting Articles
Diet
Should I Store Eggs Inside or Outside the Fridge?

Have you ever wondered why eggs are stored at room temperature in the supermarket but people refrigerate them at home?…

Arthroscopy is a common practice for joint injuries and problems. It's a practice that has revolutionized medicine, especially in the…