What Are Infantile Hemangiomas?

Infantile hemangiomas are relatively common. Therefore, it’s necessary to know what they consist of and how to treat them. 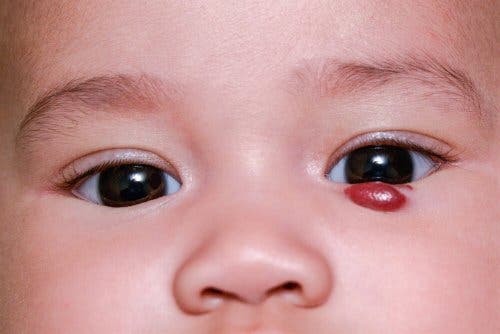 Infantile hemangiomas are generally benign tumors. They’re characterized by an abnormal proliferation of blood vessels. Although they’re usually located on the skin, they can also be found in other organs. In this article, we explain what they consist of and what to do if they appear.

What are infantile hemangiomas?

As we mentioned above, they’re generally benign tumors that usually affect the skin. This is one of the most common malignancies in breastfeeding and childhood. In addition, they affect three times more girls than boys. They’re usually located on the face or on the scalp.

Although most childhood hemangiomas are benign, some of them lead to complications. These are reddish flat or raised tumors that aren’t aesthetically pleasing. In addition, they can compress neighboring structures, such as the eyes, nose, mouth, etc.

Infantile hemangiomas evolve. They have a first phase in which there’s rapid growth. During this phase, they rapidly increase their volume and size. Then, there’s a resting phase, in which the hemangioma changes very little.

Finally, there’s a phase of involution in which it begins to naturally disappear. However, it’s advisable to intervene if they’re large or cause complications.

Why do infantile hemangiomas occur?

The reasons for their formation aren’t exactly known. However, a number of risk factors have been discovered that could be related to the development of childhood hemangiomas.

In this regard, Spanish researchers from Hospital Universitario La Paz in Madrid state that a lack of oxygen in the placenta during the first months of gestation could produce alterations in placental circulation. This alteration could be related to hemangiomas.

Other studies relate infantile hemangiomas to the mother’s advanced age and multiple gestations. Similarly, they relate them to placenta praevia and preeclampsia. Experts discovered that the more premature a baby is, the more likely they are to develop a hemangioma. Therefore, researchers associate a lack of oxygen with their development.

This article may interest you: Birthmarks and Moles: Why Do They Appear?

Infantile hemangiomas can be cutaneous or internal. In general, experts usually classify them according to:

Most are diagnosed through a physical examination. Medical professionals need a complete medical history to do so. In this regard, they need to know the details of the pregnancy, the perinatal period, and the evolution of the lesion. Most infantile hemangiomas start as pink or pale spots. Therefore, they can be confused with nevus, trauma, or malformations.

In addition, doctors can resort to complementary techniques for diagnosis. These include ultrasound, magnetic resonance imaging, and skin biopsy. Skin biopsy is the best to differentiate them from other lesions.

You may like this article: What Causes Cherry Angiomas?

The most typical complications are usually at a local level. A cutaneous infantile hemangioma can ulcerate. This increases the risk of infection, in addition to causing pain. When hemangiomas are close to the eye, they can disturb eyesight, causing astigmatism, strabismus, and even vision loss.

However, the most significant complication is the possible psychological impact. Infantile hemangiomas in visible areas affect the child’s self-esteem. This is because they’re visibly unsightly. In fact, some of them tend to scar.

Not all childhood hemangiomas should be treated. The indication for treatment is complex. However, doctors indicate treatment when they’re life-threatening, if there’s ulceration and pain, or if there’s a risk of permanent scarring.

The treatment of choice is oral propranolol. It’s a beta-blocker drug that, although effective, has many side effects. These include bradycardia, hypoglycemia, mood and sleep disturbances, etc.

Another possible treatment is interferon alfa. However, it can cause serious complications in infants. Likewise, laser treatment can also be helpful. Surgical interventions are fundamentally indicated in the treatment of after-effects. However, the use of propranolol significantly reduces the after-effects.

Infantile hemangiomas are a relatively common health problem. You should always consult your doctor if you have any questions. Similarly, you should take the psychological impact they can have on the child into account in order to improve the treatment.

Skin Spots and What Causes Them
To understand what skin spots are, first you'll have to look at what your skin is. In this article, you'll learn about skin spots and their causes. Read more »
Link copied!
Interesting Articles
Illnesses
Cancer During Pregnancy: What You Need to Know

Interesting Articles
Wellness
Tinnitus: What it is and How to Prevent it