Human communication is characterized by being extremely complex. For that reason, many people have developed a number of strategies that allow you to express yourself more adequately. One of them is “I-messages”. In this article, we explain what they are. 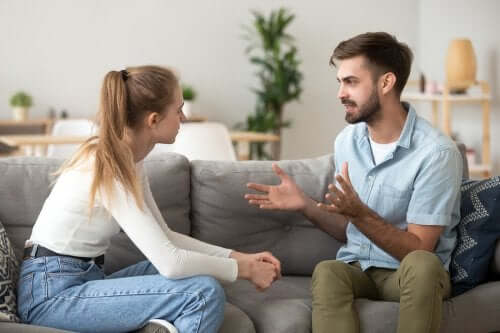 “I-messages” are an especially useful communication tool when you want to express your thoughts or emotions without hurting your partner.

Imagine, for example, a situation where you don’t like how someone else is acting. Most people may find it difficult to express their discomfort and the feelings it generates.

In such circumstances, people often avoid saying what they really think to avoid conflict. And, if they do decide to speak, they have a hard time finding the right words to be sufficiently assertive and not to offend the other.

In this case, “I-messages” is a perfect technique because they allow you to respectfully express yourself without reproaches.

“I-messages” are a communication strategy that give people the opportunity to express their feelings assertively, without attacking.

To use them, you have to prioritize speaking in the first person, focus on what you’re talking about, and describe the emotions it generates.

“I-messages” are a communication resource that allows people to express themselves more assertively, decreasing the conflict when they express something they don’t like.

For example, the typical phrase “You never put anything in its place!” is a criticism that could occur between two people who live together. Faced with this phrase, it’s easy for the aforementioned person to feel attacked and respond similarly.

Instead, saying, “This last month, I’ve been doing all the cleaning on my own and don’t feel supported” is much more appropriate. This is because the speaker described what happened and expressed how they felt, but didn’t focus on accusing the other.

Expressing a message in this way may make your conversation partner feel more empathy toward you. In addition, they won’t feel judged and it’ll be easier for them to express their emotions.

This article may interest you: Bad Habits that Will Kill Your Relationship

Differences between “I-messages” and “you-messages”

“You-messages” are those usually used in a mismanaged argument. Here are some of the differences between “you-messages” and “I-messages”:

“You-messages” hinder good communication because the other person may feel attacked if you blame them for what happened. Emphasizing guilt will only get the opposite effect. The person will defend themselves, they won’t assume their share of responsibility, and they’ll retort with other criticisms.

For their part, “I-messages” minimize defensiveness. Your conversation partner won’t respond in the same way if you say “Yesterday, I felt sad because you didn’t call” instead of saying “Thanks to you, I had an awful day yesterday”.

In “you-messages”, the issuer makes a judgment about the other person, which only generates more resentment. For example, saying “You always act the same way, you’ll never change!” won’t motivate the other person to want to solve the problem.

Instead, saying, “I get very nervous when you don’t tell me you’re going to be late” will be a better choice because it describes the emotion without judging the other person.

“You-messages” don’t solve the core problem. On the contrary, they usually make it worse. However, “I-messages” are a good strategy to find a solution between the two parties.

Focusing your attention on describing what happened, expressing how it made you feel, and proposing an alternative can greatly help solve a conflict.

You should also read: Avoiding Conflicts Undermines Your Emotional Health

How to use “I-messages”

“I-messages” are useful to communicate with anyone: friends, your partner, relatives, co-workers, or people you just met.

The important thing is that communicating in this way prevents the other person from feeling accused or guilty. On the contrary, they’ll realize that you’re exposing a situation you’re experiencing and are implying a solution without attacking them.

Thus, they won’t become defensive and understand that you don’t feel well. So consequently, it’ll be much easier for them to want to cooperate to solve the problem.

5 Tips to Make Your Relationship Last
These are tough times for couples. Each day is both a challenge and an opportunity not only to make your relationship last, but also to improve it. Read more »
Link copied!
Interesting Articles
Healthy mind
Wu Wei, The Art of Solving Problems Effortlessly