What Are Collagen Peptides?

Collagen peptides are supplements that improve the appearance of the skin. What's more, they also offer a variety of other health benefits. Where do they come from? What do the experts say? 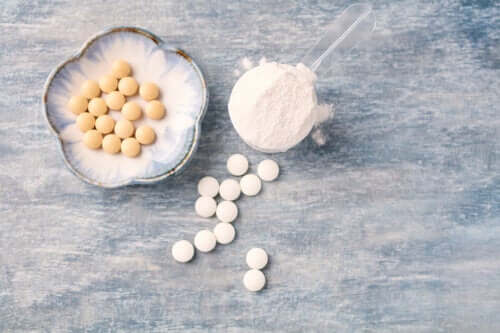 Collagen peptides are supplements that are made from the bones, skin, and cartilage of certain animals. Their main function is to increase the endogenous synthesis of this protein.

Collagen peptides are becoming more and more relevant due to their nutritional and physiological properties. That’s because they play a key role in maintaining our skin, hair, bones, and nails. So, how are they obtained? And what are their effects?

Collagen synthesis in the body

In order to better understand how they come into play in the body, it’s important to understand the role that collagen plays in living beings. This substance is one of the proteins that make up the conjunctive and connective tissues in the boys. In particular, our skin, joints, and bones.

In fact, collagen is one of the most abundant molecules in many living organisms given its role in biological structures. It’s synthesized by means of the amino acids that we ingest. The body absorbs them and forms three chains of polypeptides that connect to one another in order to form collagen.

However, despite its abundance, collagen fibers become damaged over time and lose their thickness and resistance. As a result, the aging process speeds up.

How do we obtain collagen peptides?

That said, thanks to the consumption of collagen peptides, the body is better able to synthesize this protein. The raw material used for obtaining this product is collagen itself, it’s obtained from the hydrolysis of the substance contained in the skin, cartilage, and bones of fish, pigs, and cows.

In general, collagen peptides contain a minimum of two and a maximum of 100 amino acids. What’s more, they dissolve well in cold water and don’t produce gels, even in highly concentrated solutions.

Read more: 4 Foods that Favor the Production of Collagen

The benefits of taking collagen peptides

How do collagen peptides function in the skin?

Given that its relationship is directly proportionate to the aging of the skin, collagen has gained great interest in the cosmetic industry. In this sense, researchers have discovered that short-chained peptides are bioavailable and bioactive. Therefore, they can produce certain benefits.

What’s more, when administered orally, they can reach the deepest layer of the skin and stimulate the endogenous production of components of the skin’s extracellular matrix, and it’s able to render the effects that we’ve mentioned.

Also read: How to Use Grapes to Rejuvenate Your Skin

What does research have to say on the subject?

A study published by the Nature Research Journal comments on the similarity between the collagen peptides of cows and humans. According to the researchers, this similarity explains the significant improvements that these supplements produce in the skin.

This is because the hydrolysis of bovine collagen produces peptides characterized by a sequence of amino acids that correspond with the amino acid profile of human collagen.

In addition, a scientific study published in the Journal of Medicinal Food, found that this similarity also occurs when it comes to pork collagen. According to this study, the peptides of pigs seem to improve the synthesis of collagen in humans. And, therefore, these peptides can help to improve and repair the skin on the entire body.

How to maximize the effects

While collagen peptide supplements are beneficial, many of them also contain other substances like vitamins, minerals, antioxidants–especially vitamin C and magnesium. Thanks to these substances, these supplements are able to achieve even greater effects when it comes to the hydration and elasticity of the skin.

Discover more: The 8 Foods that Provide the Most Collagen for Your Skin

Collagen peptides: What to keep in mind

The use of collagen peptides pertains mostly to cosmetic purposes since they significantly improve the appearance of the skin. What’s more, in conjunction with other substances, the effects can be even greater.

It’s also worth noting that that the elaboration of hydrolyzed collagen also exists, but serves an anti-inflammatory purpose in bones and joints.

In conclusion, it’s important to remember that collagen isn’t only composed of skin, but also bones, hair, and muscles. Therefore, guaranteeing adequate stimulation is beneficial.

Dietary Habits to Fight Premature Aging
Aging is inevitable, but some people can start earlier. Premature aging does not have a concrete cause, given that it's not rare to find people that notice their first wrinkles at 20 years old. But you can fight premature aging by improving dietary habits. Read more »
Link copied!
Interesting Articles
Beauty
Can Cosmetics Irritate the Skin?