Antibodies are a family of proteins that are part of the immune system. Read all about them here! 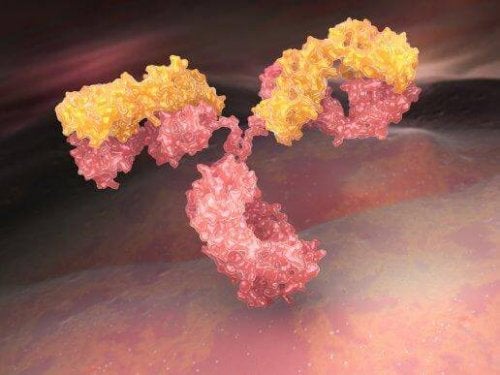 Antibodies are a special group of molecules that protect your body from the invasion of other organisms that they recognize as foreign, such as viruses and bacteria.

Therefore, they’re important to the correct functioning of the immune system.

Why Does Your Body Synthesize Antibodies?

Antibodies are the immune system’s molecules of action.

They are also called immunoglobulins. Their synthesis is dependent on specialized cells that are part of the immune system. The body produces more of them if it identifies or perceives antigens.

These substances are present in foreign agents such as bacteria, viruses, etc. Thanks to studies on the topic, it has been discovered that this plasma protein is synthesized by B cells and certain plasma cells.

Our immune system is very accurate. Thus, it produces different antibodies or immunoglobulins for each antigen. This ensures our survival. However, it also shows shortcomings such as autoimmune diseases, which are when antibodies recognize the patient’s own cells as “foreign”. Thus, they aim to neutralize this apparent threat by destroying these healthy cells as if they were pathogens.

Immunoglobulins or antibodies typically use the bloodstream to move to another body region. This way, they can travel quickly to where the antigens have been identified and destroy them.

For this reason, medical teams usually take blood samples to monitor antibodies levels. Therefore, they can also take saliva samples of samples of other substances such as cerebrospinal fluid.

This article may interest you: Oyster Mushrooms Strengthen Your Immune System

According to their features and functions, we can distinguish between various types of immunoglobulins or antibodies:

Overall, this represents the biggest percentage of antibodies. They’re innate and protect babies from birth. This is because they’re present in the mother’s placenta. Thus, these antibodies are transferred from the mother to the fetus.

In principle, they’re in your body throughout your life. They play a part in certain essential tasks such as the activation of phagocytes, meaning that they kill harmful cells.

These molecules may form a structure similar to a circle that has up to ten binding sites (with antigens). Generally, they’re the first ones to “contact” the new identified antigens.

They enable or encourage the performance of macrophages (similar to phagocytes).

This article may interest you: Eliminate Toxins with These 8 Foods for a Strong Immune System

These antibodies have a monomeric or dimeric form. This means they can appear in groups of up to two antibodies.

Furthermore, they have a huge role in the immune function of the mucous membranes (which produce breast milk, blood, mucus, tears, among other things).

Next, these antibodies consist of two heavy chains and two light chains. Unlike the antibodies we mentioned above, they’re usually located in the mast cell membranes. Therefore, most of them reside in body tissues.

They’re usually the receptors of allergens, antigens that provoke a very exaggerated response. They’re not hazardous substances per se, but our immune system recognizes them as a serious threat. They cause mast cell rupture and the production of histamine.

These antibodies form polymers that bind to antigen molecules. They make up about 1% of the proteins of the plasma membranes of B cells.

We hope you found this article interesting and informative! In case of any doubt, please contact your doctor if you want to learn more about antibodies or immunoglobulins.

The 4 Best Vitamins To Boost Your Immune System
Although the best way to get your vitamins intake is through a healthy diet, sometimes our bodies need some help. Boost your immune system with these! Read more »
Link copied!
Interesting Articles
Anatomy and physiology
Discover How DNA Works