There's penicillin resistance when bacteria transform and become capable of resisting the usual effects of this antibiotic. It's a major public health problem for the healthcare system. 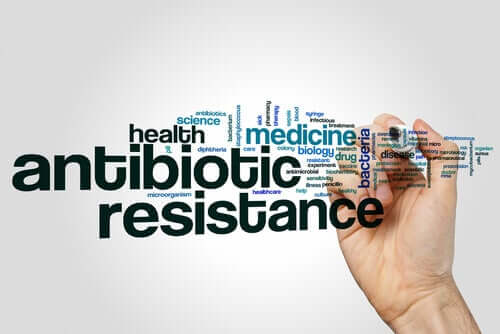 Penicillin resistance has led to the development of derivatives with a broader spectrum of action, and to beta-lactamase. Bacteria produce this enzyme that’s responsible for the inefficiency of antibiotics in the penicillin group.

The often indiscriminate use of these drugs for fear of complications causes the microorganisms to develop greater resistance. Resistance to penicillin occurs in about 25% of Streptococcus pneumoniae strains isolated in patients with otitis media. They share this resistance with about 33% of Haemophilus influenza strains.

The problem of resistance to penicillin and other antibiotics has led many countries to develop policies for the rational use of antibiotics. Thus, the important thing, beyond legislation and guidelines, is that both physicians and patients understand that they can’t use antibiotics indiscriminately.

Penicillin and its mode of action

Let’s begin by saying that penicillin is a subclass of antibiotics referred to as beta-lactam antibiotics. These contain a chemical structure called the beta-lactam ring.

We use them to treat infections caused by bacteria categorized as gram-positive and some gram-negative -streptococci in the former case and meningococcal infections in the latter. Penicillin kills bacteria by debilitating the cell wall that protects them.

However, some bacteria produce substances – enzymes – that can inactivate beta-lactam antibiotics. In order to avoid this, penicillins are administered in combination with drugs that prevent the action of these enzymes – if the infection is caused by this type of bacteria.

Penicillins are rapidly distributed in most tissues, especially when there’s inflammation. All of them are at least partially eliminated by urine, and most of them reach high concentrations in urine.

This happens when bacteria transform and become capable of resisting the effects of the antibiotic. These bacteria can lead to a variety of infections that are more difficult to treat than non-resistant bacteria.

As we said above, an excess of antibiotics can lead to resistance. Sensitive bacteria die every time you take them but some can resist, grow, multiply, and spread to other animals.

The most common resistant bacteria are Escherichia coli, Klebsiella pneumoniae, Staphylococcus aureus, and Streptococcus pneumoniae. Thus, resistance to penicillin and other antibiotics can also lead to increased healthcare costs and increased mortality.

Find out How to Identify Allergic Reactions to Drugs

Here are some recommendations to help prevent resistance to penicillin and other antibiotics:

The World Health Organization (WHO) system, known as GLASS, currently includes 52 countries. Of these, 25 are high-income, 20 are middle-income and seven are low-income. This new system revealed the widespread presence of antibiotic resistance in samples from 500,000 people in 22 countries with suspected bacterial infections.

In addition, data published by the WHO on antibiotic resistance indicate that resistance levels to serious bacterial infections are high. They occur in both high-income and low-income countries.

Read about Penicillin and its Uses

Antibiotics are great against bacterial infections and can save a life when used correctly. There is, however, a growing problem of resistance to penicillin and other antibiotics.

Finally, this is a highly effective antibiotic, inexpensive to produce, and you can find it almost anywhere in the world. It would be a tragedy not to be able to use it due to increased bacterial resistance.

Symptoms and Causes of Penicillin Allergy
There are different types of penicillin allergy. This is an antibiotic that derives from Penicillium, a fungus that belongs to the β-lactams. Read more »
Link copied!
Interesting Articles
Medication
4 Types of Injections You Should Know About