An early detection of the warning signs in adolescent health could help improve their overall well-being. Find out more here! 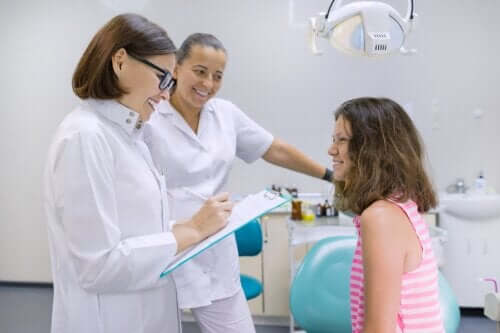 You’ve probably heard phrases such as “teens aren’t healthy”. However, many people don’t know exactly what health is and what it refers to, meaning they should first understand this term well before drawing conclusions or making comments. Adolescent health encompasses many different aspects.

Generally speaking, adolescence is a healthy stage of life. Nevertheless, teens suffer from many behavior issues, due to their exploratory nature and the need to discover new things. Therefore, it’s important to know the warning signs that may be telling you that your teen is suffering from a health disorder.

Some children’s health issues greatly concern pediatricians. Thus, it’s essential to answer the questions that arise when you perceive and feel that something isn’t right regarding your teen’s health. Among other things, you have to analyze them from scientific evidence and advances.

The approach to the complexity of health processes, due to all the variables that play a role, the gut feeling that something isn’t right, and orientation on issues such as loneliness in adolescence, have particular characteristics and medical care needs.

In addition to the need to pay attention to violence and behavior disorders, which can be responsible for other health disorders, they must pay close attention to situations related to poor or even aggressive communication, crying during the checkup, and difficulty sleeping.

Among other things, they should assess excessive screen use, in addition to taking aspects inherent to sexuality and unintentional pregnancy in adolescence, among others, into account.

Depression, suicide attempts, and self-injury, among others, make the early detection of possible manifestations and the promotion of mental health very important.

The risk of suicide in adolescents and young people is a paradigmatic case of issues that often worries doctors. Nonadherence to treatments and the importance of shared decision-making should also be considered.

In the “2019 virtual course on adolescent health: the issues that sometimes keep you up at night”, Dr. Ana Nuciforo, a child and adolescent psychiatrist, pointed out that vital function modifications occur during this stage of life, such as:

The Spanish Society of Adolescent Medicine (SEMA) states that:

“During adolescence, teens develop in different physical, psychological, emotional, and social aspects. Likewise, it’s a time of many risks, during which teens adopt habits and behavior that will carry on into adulthood.”

Health professionals must be ready to address the comprehensive health needs of this very particular stage of life, detect problems as soon as possible, prescribe appropriate treatment, and adopt preventive measures through health education.

You don’t want to miss this article: Most Frequent Reasons Why Teenagers Visit a Doctor

What we can do to keep teens healthy

The initial question about whether adolescents are healthy or not isn’t easy to answer. This is because, in addition to situations, such as feverish symptoms and the appearance of cancer at this stage, there are health problems that may have started in childhood and continued into adolescence. There may also be others that begin directly in adolescence, such as eating disorders, which can then continue into adulthood.

Professional training is an essential element to accompany the teen and their families. This challenge is well worth it!