Venous Thrombosis Due to Contraceptives

Hormonal contraceptives are used throughout the world. However, they have many negative side effects. In fact, there's a relationship between estrogens and venous thrombosis. Continue reading to find out more. 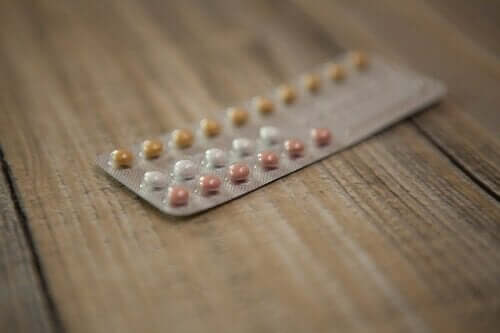 The use of hormonal contraceptives is increasingly widespread as a method of preventing pregnancy. They’re safe for the most part; however, some data reveals that women who use them have a greater risk of venous thrombosis.

Based on the external administration of sex hormones to the body, hormonal contraceptives help prevent pregnancy. Receiving these hormones prevents ovulation in each woman’s menstrual cycle.

In addition, they also thicken the vaginal mucus, making it very difficult for sperm to pass through. They’re effective when used accordingly.

What are hormonal contraceptives?

Firstly, there are many different types of hormonal contraceptives, among them:

As these aren’t barrier contraceptive methods, we must remember they don’t protect against sexually transmitted diseases, only pregnancy. Those with an active sexual life with people they’ve just met should use condoms for protection.

It’s the formation of a blood clot in the deep veins of the body and it often occurs in the legs. A clot can travel through the bloodstream until it becomes stagnant in a smaller-sized vessel and interferes with the normal blood circulation.

When this clot travels to the lungs, an embolus, the result will be a pulmonary embolism. This is a very serious situation and has a high rate of mortality in those who suffer from it.

There are many risk factors for developing venous thrombosis. Some of the most prominent are obesity and, frequently, immobilization.

Thus, after an operation in which you must remain prostrate, or in the case of very long trips, you must take the necessary precautions to prevent venous thrombosis. In addition, other risk factors are smoking and pregnancy.

You may be interested: Should I Stop Using Contraceptives?

The risk of venous thrombosis due to hormonal contraceptives

Estrogens, a key component of hormonal contraceptives, appear to cause blood clotting. This is why, in the face of prolonged exposure and after taking high levels of these hormones, the risk of altered coagulation and thrombus formation increases.

Estimates indicate that the risk of suffering a thrombosis after taking contraceptives is for one in every 100,000 women.

It may seem a low risk but you must keep in mind that the victims are usually young and previously healthy women. Also, there are millions of contraceptive users around the world. Thus, keep this in mind when choosing this type of contraceptive.

Still, not all hormonal contraceptives are made the same. Increasingly, contraceptives contain a lower dose of estrogen. Thus, it minimizes this and other risks that these hormones may pose.

Finally, hormonal contraceptives remain a very safe method for preventing pregnancy. Their widespread use and advances in pharmacological development mean they carry fewer and fewer risks as time goes by. However, keep in mind there are always side effects.

Therefore, professionals recommend that you consult your doctor before using any type of contraceptive. Only they can evaluate your case, determine any possible risk factors, and advise the safest format and composition for you.

Indications and Adverse Reactions for Desogestrel
Desogestrel is one of the options for contraception and we'll look at the benefits and adverse reactions of Desogestrel in this article. Read more »
Link copied!
Interesting Articles
Medication
Topiramate: Uses And Side Effects