Varenicline is a drug for quitting smoking. It's very safe and even patients with chronic diseases can use it. 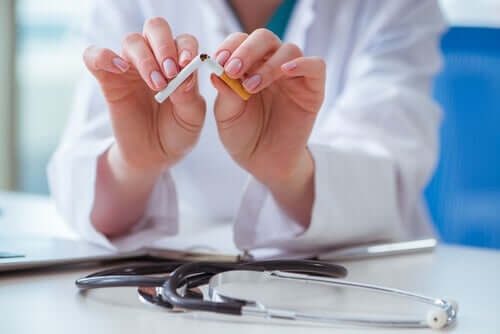 The drug Varenicline is a first-line treatment to quit smoking and reduce nicotine dependence. The effectiveness of this type of pharmacological treatment surpasses previous treatments, according to scientific evidence.

This drug is widely prescribed by smoking cessation specialists and other health professionals. This is because it meets the basic conditions for this kind of therapy. A drug to quit smoking must:

This disease has a high prevalence in the general population and its morbidity and mortality rates are high. In fact, it’s one of the leading causes of preventable death in the world. It’s also the main risk factor associated with diseases such as lung cancer and chronic inflammatory lung disease.

In addition, smoking leads to high health care costs that one can reduce by investing in a smoking cessation treatment. It’ll always be less expensive to invest in prevention rather than in definitive treatments once there’s a major disease.

How does varenicline work?

Labs developed this medication from an alkaloid present in several plant species. Researchers discovered these plant varieties because some Eastern countries have been using them for a long time.

Varenicline is specifically designed for smoking cessation as it selectively binds, partially, to nicotinic receptors in the brain.

Thus, it helps control the withdrawal syndrome and the uncontrollable desire to smoke by reducing anxiety symptoms and rewarding and reinforcing those areas targeted by smoking.

Read and Discover How Smoking Affects the Heart

This drug isn’t significantly different in terms of how it enters and moves around the body in terms of sex, age, race, and interaction with other medications. Varenicline is quite safe and the scarcity of side effects greatly facilitates its use.

Pharmaceutical companies market it in tablet form for oral administration. The body absorbs it well and people can take it with or without food. Its maximum concentration happens 3 to 4 hours after taking it, and it leaves the body in the urine. There’s hardly any metabolization — no chemical transformations of its structure.

It follows this protocol:

It isn’t necessary to stop smoking during the first seven days of treatment; however, a person must stop by the eighth day.

The duration of this treatment is 12 weeks, although some people stop earlier due to the deceptive sensation of having attained success. Know that quitting before the end of the 12-week treatment can lead to a relapse. Thus, the person must resume treatment as soon as possible.

The most frequent ones are:

One can minimize nausea by taking varenicline tablets with meals. In addition, you can deal with insomnia by moving the second dose of the day forward. However, be aware that insomnia can also be due to withdrawal syndrome. People often think this is a side effect of the drug, but it isn’t.

Find out how to Kick The Habit: Nine Good Reasons To Stop Smoking

The perks of quitting smoking

The following are just a few proven benefits:

People with COPD show an improvement of approximately 5% in their pulmonary function three months after quitting smoking. In addition, the risk of ischemic heart disease decreases by half a year after quitting.

Varenicline is a first-line option in the treatment of smoking. It’s an effective, safe, and well-tolerated drug overall, not only in seemingly healthy smokers but also in those with visible health conditions.

Finally, consult your doctor if you plan to quit smoking. They should be able to draw up a controlled plan to guide you in your decision and make it more bearable.

Kick The Habit: Nine Good Reasons To Stop Smoking
There are lots of good reasons to kick the habit and stop smoking. This article lists nine, which will benefit you in many different ways. Read more »
Link copied!
Interesting Articles
Medication
Progestin-only Birth Control: Benefits and Side Effects

Interesting Articles
Pregnancy
Exercising While Pregnant: Is it Safe?