Vape Pens: Everything You Need to Know

Do you think vape pens are innocent elements that can help you stop smoking in a healthy way? You may be mistaken. We'll tell you more about it below! 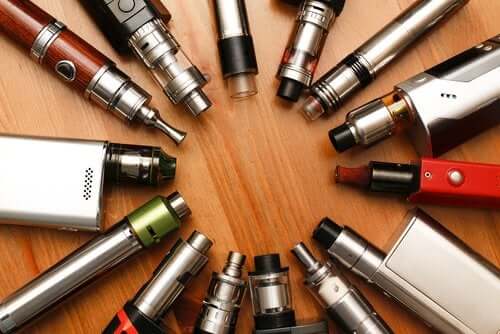 However, the compounds used to vaporize nicotine and flavors at low temperature are transformed into some toxic substances that you should know about.

Vape pens are cigarette-like devices made up of three elements:

The cartridge contains a liquid solution that can contain different substances and is called e-liquid. The cartridges can be rechargeable or replaceable, although there are also disposable electronic cigarettes.

What do e-liquids contain?

The main components of e-liquids are the following:

Neither glycerin and propylene glycol are considered toxic when administered orally. However, these liquids may contain chemicals that increase their toxicity. These include the following:

Specialists have analyzed different types of e-liquids for vape pens. The results vary according to the brand. However, they’ve determined that the more ingredients they contain, the greater their toxicity.

They have also found traces of carcinogens typical of classic tobacco, such as nitrosamines, metals, phenolic and volatile organic compounds. These specialists have even determined that the levels of nickel found are higher than those found in the classic tobacco.

The greatest toxicity comes from flavor-enhancing compounds such as vanilla and cinnamaldehyde. Therefore, the more flavorful the e-liquids are, the more toxic.

How do vape pens affect health?

Vape pens produce alterations in lung function, although some of their effects, such as bronchoconstriction, are less severe than those produced by the classic cigarette.

Propylene glycol present in the e-liquids decomposes at high temperatures. It therefore produces potentially carcinogenic substances, such as propylene oxide.

On the other hand, glycerol produces acrolein, although in a lower proportion than conventional cigarettes. Both propyleneglycol and glycerol also give rise to carcinogenic substances, such as formaldehyde and acetaldehyde, according to this report by the Scientific Committee of the Spanish Consumer Agency.

In addition to being very addictive, nicotine can affect the following:

No. Non-nicotine powered vape pens aren’t physically addictive. However, the addiction has a physical component, of short duration, and a psychological one that is longer.

The risk of getting addicted to vape pens depends on the use. You can use it to replace tobacco, to reduce its consumption, or simply in a playful way by non-smokers.

Concerning the substitution of tobacco, they may have the same effects of psychological addiction. This is because it doesn’t favor behavior change regarding conventional smoking due to its similarity.

Therefore, although vape pens help reduce physical withdrawal, they don’t help when trying to quit smoking, according to the Spanish Association against Cancer. For that reason, many consumers combine their use with the traditional cigarette, making it difficult to access conventional pharmacological help.

The use of vape pens isn’t a good influence on future smokers, since it could increase tobacco consumption in young people and normalize consuming tobacco in general.

Also read: Smoking Cessation: How to Address Each Stage

Getting rid of this habit is fundamental

Currently, studies suggest that vape pens may be less harmful than conventional cigarettes. However, nicotine is highly addictive in any form, and the substances in the steam are carcinogenic.

Therefore, if you or someone you know is looking to stop smoking, visit your doctor. It’s also important to seek psychological help, to combine the doctor’s treatment with that of a mental health specialist.

Healthy habits
Constipation: What Causes it?

Constipation has a medical definition. However, it's also clear that each person has their own! Each one of us knows our normal defecation rhythm and a change to this is…