Can Bras Cause Breast Cancer?

When you don't use a bra, the natural movement stimulates lymphatic circulation. This helps eliminate toxins and may reduce the risk of tumors. 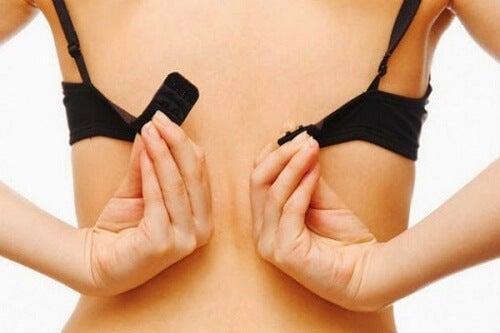 Bras, girdles, and other forms of support known by different names in different places, have become a necessity for most women now. They create more firm-looking breasts, and are one of the most attractive items in the art of seduction. However, since the last century, research has found that bras may have negative effects on breast health. So, could bras cause breast cancer? We’ll take an in-depth look into this in today’s post.

According to studies, using a bra for hours on end interrupts the lymphatic drain of the breasts. This increases its temperature, which, in turn, can increase the risk of breast diseases.

Could bras cause breast cancer?

Since the 30s, there has been research to determine the relationship between bras and the formation of breast cancer. One of the most recent ones found that bras can compress the lymphatic glands and passages. This prevents the elimination of toxins through natural lymphatic drains. Over time, these can accumulate in the breasts and form cysts, fibrous nodules, and in some cases, cancerous tumors.

When women use the wrong bra size, this causes a compression on the breasts. As a result, the capillaries and lymphatic veins compress, and this obstructs circulation.

Not only this, but bras also considerably increase the temperature of the breasts, due to the material that covers the breasts and the pressure exerted on them. Some precancerous or cancerous breasts have higher temperatures than healthy ones. So, could it be true that bras cause breast cancer?

When a woman doesn’t use a bra, her breasts are free. The natural movement serves as a sort of massage that stimulates good circulation among the lymph nodes. This then promotes the natural elimination of toxins and reduces the risk of cysts and tumors.

Above and beyond this, it has been found that free breasts tend to have less discomfort and pain compared to women that use a bra.

See also: This Exercise Routine Will Help You Tone Your Breasts

Two British surgeons, specializing in breast disease, decided to do an experiment to determine whether the use of a bra could reduce breast pain. The results showed that those who didn’t use a bra for 3 months felt fewer pains. For some women the pains disappeared entirely.

Are there good types of bra?

The textile industry has had a great deal of success producing all kinds of bras. This has led to the belief that not using a bra can cause breasts to sag. Many women rely on this belief and, out of fear, even sleep with a bra on.

However, since 1978, several studies conducted in France, the United States, Japan, and Great Britain have shown something else. Contrary to popular belief, bras can actually stimulate the sagging of breasts. This is a hotly debated topic, since the myth about free breasts and sagging has been upheld in spite of a lack of evidence to back it up.

The most recent studies conducted in Japan and France found that, contrary to popular belief, the use of a bra doesn’t keep breasts firm, doesn’t lift them, nor does it improve the quality of skin.

How can this be explained?

When a women uses a bra non-stop, the Cooper’s ligaments and skin muscles, which serve as the natural breast support, stop carrying out their function. These deteriorate, while the breasts lose their firmness and sag more and more with time.

The breasts are covered by a fine and very resistant membrane that makes them stronger while they perform their function.

For precisely this reason many women have an undesirable tense feeling when they stop using a bra. It isn’t because the breasts are sagging, but rather that they are beginning to work to try to rebuild firmness.

Tips for Beautiful Breasts
The reasons why a woman would want beautiful breasts would be, without a doubt, very different. However, all women respond to this personal question with a size that would give them better self esteem and better self-perception. Read more »
Link copied!
Interesting Articles
Did you know?
Why Do We Have Armpit Hair?