The Uses and Effects of Esomeprazole

Esomeprazole is a highly safe and effective drug for the treatment of gastric hypersecretion. Discover more about the uses and effects of Esomeprazole in the following article. 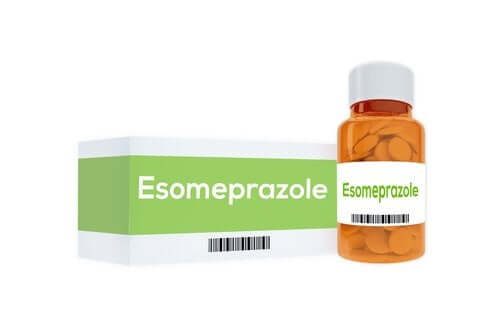 In this article, we’ll tell you everything you need to know about the uses and effects of esomeprazole.

Esomeprazole belongs to a group of medications called proton pump inhibitors, known by the acronym IBP. The mechanism of action of these drugs is to reduce the amount of acid that the stomach produces.

Mechanism of action of esomeprazole

Chemically, esomeprazole is a weak base, which is concentrated and converted into its active form in the extremely acidic environment of the parietal cell secretory canaliculi – located in the stomach. There, it inhibits the enzyme H+K+-ATPase – the so-called proton pump – and thus inhibits acidic basal secretion and stimulated secretion.

When do doctors recommend treatment with esomeprazole?

Doctors prescribe esomeprazole for adults for the treatment of the following ailments:

You may also want to read: The First Hormonal Symptoms of Pancreatic Cancer

Doctors may prescribe treatment with esomeprazole for adolescents from the age of 12 in case of:

Dosage and form of administration

It’s important to note that the dosage of esomeprazole depends on the type of condition. However, its usual administration is in tablet form at a dose of 20 or 40 mg, depending on the doctor’s prescription.

Furthermore, patients should swallow the tablet whole with the help of liquid, without chewing or crushing it. However, patients with swallowing difficulties can dissolve the tablet in half a glass of non-carbonated water. It’s important not to use any other liquids, since they could dissolve the enteric coating that prevents the disintegration of the tablet in the gastric environment.

As for patients who can’t swallow, it’s also possible to dissolve the tablets in still water and administer them through a gastric tube. If necessary, doctors may also assess the intravenous route.

The most frequently common adverse side effects of esomeprazole are:

In short, the safety profile is similar for the different formulations, treatment indications, age groups, and patient populations. To date, research has revealed no dose-related adverse reactions.

Interactions with other medications

Drug-to-drug interactions can occur through several mechanisms. Either malabsorption of the drug due to changes in gastric pH, or competition from cytochrome P450 enzymes.

The most significant drug interactions of esomeprazole with other drugs are the following:

The main contraindication to the administration of this drug is the hypersensitivity to the active principle. In other words, to benzimidazoles or to the excipients it contains, for example sucrose.

It’s important to note that specialists don’t recommend concomitant administration of esomeprazole with atazanavir – an antiretroviral used in the prevention and treatment of HIV.

However, if it’s deemed strictly necessary, then close clinical monitoring is essential, along with an increase in the dose of atazanavir to 400 mg with 100 mg of ritonavir. However, doctors shouldn’t recommend exceeding the 20 mg dose of esomeprazole.

Responsible use of proton pump inhibitors

Once again, esomeprazole belongs to the most widely used group of medicines in the world. Although we’ve already seen that it’s a very safe drug with very mild adverse effects, they tend to be considered simple gastric protectors without side effects and are often available without a prescription.

Unfortunately, however, this fact may lead to the erroneous use of esomeprazole for the treatment of symptoms that have nothing to do with gastric hypersecretion, which is its main indication.

According to some studies, prolonged and inappropriate use of esomeprazole may result in the following:

However, esomeprazole is a highly safe and effective drug for the treatment of gastric hypersecretion.

Self Medication and its Health Risks
There's a high incidence of self-medication with antibiotics. Consequently, some countries show very unfavorable records of antibiotic resistance, especially in outpatient bacterial pathogens. Read more »
Link copied!
Interesting Articles
Medication
4 Types of Injections You Should Know About