The Uses and Effects of Codeine

In the following article, we'll talk about the uses and effects of codeine, which belongs to the opiate family. If you have any questions about this drug, make sure to see a doctor. 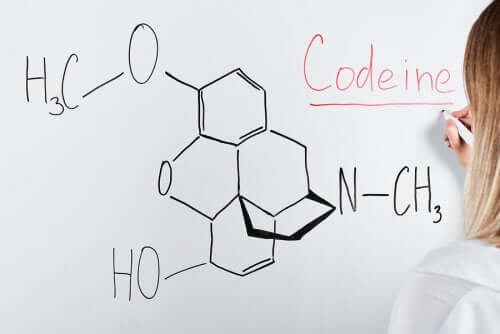 Codeine is a drug that belongs to the opiate family. It’s similar in structure to morphine, so its effects are similar. However, codeine has less analgesic activity and produces fewer side effects than morphine. In the following article, we’ll tell you more about the uses and effects of codeine.

Patients can take this drug can orally, subcutaneously, or intramuscularly. The particular route of administration will depend on the individual patient’s situation.

French chemist and pharmacist Pierre-Jean Robiquet, who’d already been credited with other discoveries in the field of pharmacology, discovered codeine as early as 1832.

It’s an opioid that’s useful in treating both dry and unproductive coughs, as well as mild to moderate pain. On the market, it’s considered an antitussive.

However, some forms combine codeine with paracetamol in different proportions for the treatment of mild to moderate pain. Also, studies have taken place to compare their efficacy in oncological treatment.

Mechanism of action: What are the effects of codeine on the body?

Codeine owes its analgesic and antitussive effects to its CNS receptor agonist activity. However, this agonism is weak in comparison to other opioid drugs.

To trigger its analgesic action, codeine has to convert to morphine, which it will do once the body metabolizes it, as we’ll see below.

As for opioid receptors, we can find three main types: μ, κ, and δ. All of them are G-protein-coupled and function as both positive and negative modulators of synaptic transmission through G-proteins.

Codeine, like all other opioid drugs, doesn’t alter the pain threshold or affect the conductance of nerve impulses. What it does do is modify the perception of pain.

As for the antitussive action that this drug triggers, it’s mediated by the direct action it has on cough receptors in the medulla center. The effects of codeine are also capable of producing dryness of airway secretions and increasing the viscosity of bronchial secretions.

Also, another advantage is that the dose necessary to achieve its antitussive action doesn’t trigger analgesia.

Read also: What Are Prescription Opioids and What Are They For?

Pharmacokinetics: What happens to codeine in the body?

Pharmacokinetics comprises the processes of absorption, distribution, metabolism, and elimination of a drug. In this regard, codeine is an active substance that patients can take both orally and parenterally.

Once a patient receives codeine, the body absorbs it well and the onset of action begins 10 to 30 minutes after intramuscular administration. In the case of oral administration, it takes between 30 and 60 minutes.

As for the antitussive effects characteristic of this drug, they reach their maximum efficacy 1 to 2 hours after oral administration. They can last up to 6 hours.

At the same time, regarding its distribution, it hardly binds to plasma proteins. Finally, the liver metabolized it, an essential step for its transformation into morphine, thus triggering its action. Codeine is therefore a metabolite of morphine.

Patients with CYP2D6 cytochrome problems may be resistant to treatment with this drug.

Finally, once the liver has metabolized it and the medication’s achieved its appropriate effect, the body excretes both codeine and its main metabolites (morphine and norcodeine) in the urine. However, it may excrete a small amount in the feces.

Codeine is a prodrug that, once administered, turns into morphine through metabolization in the liver. It’s often marketed for the treatment of cough. However, it can also have analgesic actions at higher doses.

You can consult both your doctor and pharmacist if you have any doubts about this drug. Also, you can consult them about any symptoms you may have since starting treatment with codeine to prevent complications.

Interesting Articles
Other treatments
Description of Speech Therapy and Its Characteristics