Uses and Medicinal Properties of Cinnamon

The cinnamon plant has been used since ancient times for its innumerable health effects. In this artice, discover the many amazing uses and medicinal properties of cinnamon! 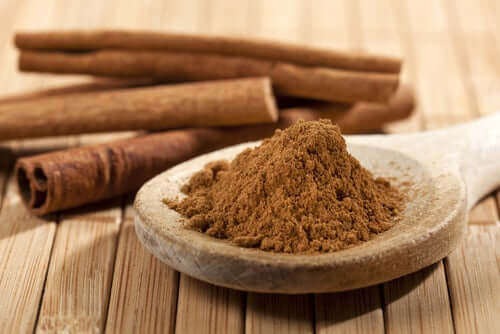 Cinnamon is an aromatic plant whose use dates back to ancient times. For a long time, people used cinnamon for medicinal purposes. It was only later that they also discovered its value for dishes and desserts. Cinnamon is very frequently used in desserts, as well as in chocolates and coffee because of its intense aroma. The most well-known variety is cassia cinnamon which is also the one that contains the most curative properties.

In this article, we’ll share a wide variety of effects attributed to the use of cinnamon for respiratory, digestive, and reproductive illnesses. Keep reading to learn more!

The characteristics and history of cinnamon

Cassia cinnamon is a perennial tree that can grow up to 15 meters (49.21 ft feet) tall. It has branches with a double bark that is very aromatic. Its natural habitat is the south of India and Sri Lanka, but today it’s grown in other warm climates. Cinnamon comes from the inside of the bark and offers a large amount of calcium, potassium, vitamin A, carbohydrates, fiber, vitamin C, iron, magnesium, and phosphorous.

People have used this aromatic plant for a very long time, at least since the time of the Egyptians, as can be seen in drawings from the pyramids. The Egyptians imported it from China in 2000 B.C. and at that time used it to embalm mummies. Later, in Greece and Rome, they used it to improve digestion.

Research has shown that along with cardamom and pepper it was one of the first spices used in the Mediterranean region. In the 19th century, people started to grow it in other parts of the planet and nowadays it is common to include cinnamon in desserts, coffee, and chocolate.

What are the medicinal uses and properties of cinnamon?

This aromatic plant has many different uses because of its properties and health benefits. Internally, it helps the digestive, respiratory, circulatory, and reproductive systems. Let’s take a look at how.

Due to its unique properties, cinnamon can help prevent gas, vomiting, and ulcers, and stimulate salivation and gastric juices. You can use cinnamon in cases of:

Due to its expectorant, antibacterial and anti-inflammatory properties, cinnamon is used for bronchitis, colds, and coughs. For these issues, you should drink two drops of cinnamon essence mixed in a glass of hot water with a tablespoon of honey.

Cinnamon has anti-sclerotic and antithrombotic properties which help to reduce cardiovascular risk.

See also: The Best Remedies to Treat Anemia During Pregnancy

In this case, it has been said that cinnamon may help:

External uses for the properties of cinnamon

Also, the diverse formulas that you can buy or make at home with cinnamon can treat many illnesses related to fungus and bacteria. For example:

Finally, the tradition of Chinese medicine says that in addition to the medicinal uses mentioned previously, the properties of cinnamon can also help to treat:

However, it’s always important to note that there are still many scientific studies required to prove the efficacy of these remedies. Nevertheless, what we do know is that it’s a very healthy spice to have on hand!

Cinnamon greatly stimulates blood circulation, so it is not recommended for those with coagulation problems. Also, pregnant women should avoid or restrict their usage of cinnamon.

If you have any questions, you should consult a doctor or pharmacist. Although cinnamon is a natural herb, it can have undesired effects on the body.