Types of Glaucoma: What You Need To Know

There are different types of glaucoma, but they all cause vision impairment. If left untreated, this condition can lead to blindness. We'll tell you all about the disease in this article. 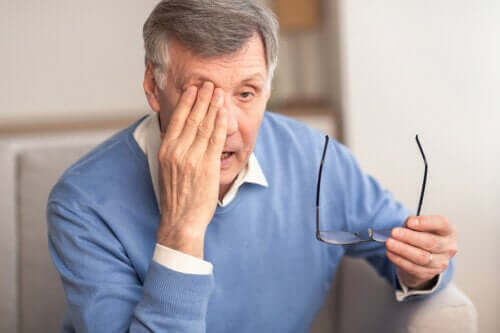 Glaucoma is an eye disease that manifests in different ways. Although it’s normally associated with hypertension of the eye, the truth is that there are types with a normal eye pressure.

However, having said that, all types of glaucoma are chronic and degenerative. This means that they’ll evolve if not treated, and will culminate in optic nerve damage. The worst result of the process is blindness due to the destruction of the system that captures images and sends the information to the brain.

One of the problems with diagnosing glaucoma early is that it has no obvious signs early on. A person can spend years developing ocular hypertension without knowing it at all.

To confirm this condition you need to measure intraocular pressure. This is a procedure that the ophthalmologist performs with the appropriate equipment. Although they’ll do a measurement when there are symptoms, they might also do it routinely in certain at-risk patients who don’t yet have the disease.

Risk factors for all types of glaucoma

There are people who are at higher risk of developing any type of glaucoma. In these patients, it’s important to be attentive to the initial signs, as well as to take measurements of intraocular pressure during adulthood.

A fundamental issue is that risk increases with age. Adults over 40 years of age gradually increase the chance of developing the disease as they age.

Also, family history is an indicator. If a parent has had glaucoma of any kind, it’s likely that one of their children will also get it. However, they won’t get it in childhood, but later on as an adult.

The association with other eye diseases is also important. Being near-sighted is a risk factor for glaucoma. Researchers estimate that near-sighted patients have twice the risk of increasing their intraocular pressure than the rest of the population.

Keep reading: Find Out How the Eye Cleans Itself

Most common types of glaucoma

As reported by the National Eye Institute, there are 4 common types of glaucoma. They’re classified by the way in which the drainage of fluid from the eyeball is obstructed and by when they appear.

This is the most prevalent type of glaucoma in the world. What happens is that it blocks the small outlets that the eye uses to remove the internal fluid. Then, because of an accumulation of fluid with no way of leaving, the intraocular pressure increases.

Its progression is very slow, chronic, and degenerative. Patients tend to discover it late, after some of the damage has already taken place. Because of this, it’s often called silent blindness.

Treatment ranges from medication to surgery. Also, there are various surgery options which your ophthalmologist will choose.

The closed-angle type of glaucoma is much less common than the open-angle type. In addition, it tends to develop symptoms more acutely and more noticeably than the previous type.

The name closed angle responds to the measurement ophthalmologists make of the angle formed by the iris and the cornea. In this case, this value is less than what is considered normal and it’s precisely this changed anatomy that blocks the natural drainage of fluid from the eye.

Medical care for this disorder must be prompt. It gives less time to act than open-angle glaucoma and the consequences can be more serious you don’t act on it quickly.

This type of glaucoma is the rarest. When the ophthalmologist measures the patient’s intraocular pressure, it’s at normal or even low values.

But the damage to the optic nerve and the degeneration are there, as in the other types. Scientists don’t know the cause of this type of glaucoma for sure, and treatment is difficult.

The congenital variety of the disease appears because the baby is born with an anomaly in the angle of the iris and the cornea, which prevents the normal development of the intraocular fluid drainage channels. So, from the start of life, the eye increases internal pressure.

The solution today is an early surgery on the young child. That way, you can avoid serious future complications.

All types of glaucoma are serious

Although diverse, each type of glaucoma is serious. If you have any symptoms of vision loss, you shouldn’t put off seeing an ophthalmologist.

The professional will measure your intraocular pressure and perform more procedures to evaluate the vitality of the retina and the optic nerve. If they detect a change, they might suggest the use of medication and, if necessary, corrective surgery.

4 Natural Remedies to Compliment Your Glaucoma Treatment
Some of the best glaucoma remedies are eye drops, but there are other natural remedies that can help this condition. Read on and find out more. Read more »
Link copied!
Interesting Articles
Illnesses
What is Venous Thromboembolic Disease?