Types of Creatine: Properties and Uses

Creatine is one of the most used dietary supplements by athletes around the world. In this article, we explain the types of creatine, as well as their properties and uses. Keep reading! 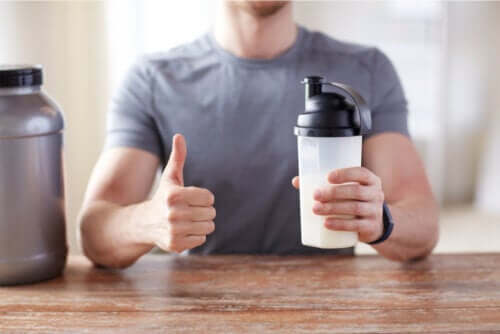 Today, most people around the world exercise, either as a hobby or professionally. That’s why many products have been created to improve athletic performance. One of the most popular is creatine. Below, discover the types of creatine, as well as their properties and uses.

Creatine is a non-protein nitrogen compound. It’s found in the muscles, and in the brain to a lesser extent. The major dietary sources are red meat and seafood.

The main function of creatine is related to ATP synthesis (this substance provides energy during metabolism), which greatly improves athletic performance. However, it’s also used to treat some brain disorders and heart failure.

Types of creatine and their respective properties

This is the most popular creatine supplement in athletes and well as the purest form, since the other types are derived from it. It’s very effective and has been shown to improve various aspects of fitness training, such as speed and peak power output.

This compound usually doesn’t contain additives. Thus, 88% of it is creatine, while the remaining 12% is water. It has the ability to hydrate cells, reduce cell damage, and increase intramuscular stores.

As it’s one of the newest types of creatine, few studies talk about it. However, the mixture of creatine with hydrochloric acid produces a stable molecule that’s up to 38 times more soluble than creatine monohydrate. Thus, the body can absorb it more easily. In addition, it has the same effects and is less likely to cause kidney damage.

This dietary supplement consists of a molecule of creatine bonded to a molecule of glucose. Thus, it has a faster intestinal absorption. In addition, it travels in the bloodstream in an effective way. Likewise, it more effectively penetrates muscles than creatine monohydrate, since glucose produces a momentary insulin peak.

Phosphocreatine or creatine phosphate is a chemical compound found in the body that provides great energy value. However, its store levels are low. Therefore, it’s one of the most sought-after types of creatine. It consists of creatine and phosphate in a 62-38 ratio.

It has the same functions as creatine monohydrate, which is why it’s perfect for building lean tissue. In addition, as it’s an extra source of energy, it reduces fatigue while you’re exercising.

Also known as alkaline creatine or buffered creatine, it’s the mixture of creatine monohydrate and alkalizing powders. The main idea of ​​this mixture is to elevate the pH of the compound to improve its absorption and prevent the formation of creatinine, reducing kidney damage.

For a long time, it was believed that kre-alkalyn creatine yielded better results than monohydrate. However, a recent study showed that there are no significant differences in performance.

This compound is a mixture of two to three creatine molecules and malic acid, which makes it more soluble and easily absorbed. In addition, it improves an athlete’s endurance, sprint, and strength, without affecting their blood pressure or fat levels.

Creatine ethyl ester is nothing more than creatine monohydrate esterified with an alcohol methanol or ethanol. Said esterification facilitates the passage of the compound through muscle cell membranes. Thus, it’s absorbed quite fast and low doses suffice.

This is a mixture of 40% creatine and citric acid, which makes it the most soluble compound of all. In addition, thanks to the citric acid it contains, it produces a lot of muscular energy. As it’s very soluble, it doesn’t cause stomach problems. However, it’s more expensive than other types.

Read on to learn more: All About Creatine its Amazing Health Benefits

Uses and safety of the types of creatine

High-performance athletes use creatine in order to improve their speed, endurance, and strength. In fact, experts recommend its use in sports such as rowing, high jump, and soccer. This is because its effectiveness has been proven on multiple occasions.

On the other hand, creatine supplements can improve creatine deficiency syndromes (CCDS), inborn errors of creatine metabolism, which is when the body is unable to produce it on its own. Even though there isn’t enough scientific evidence, doctors are prescribing it for cases of heart failure.

It’s safe to consume the various types of creatine, as long as you ingest it in the short term and at maximum doses of five grams. However, you should consult a doctor before you start any dietary supplement.

Keep reading to learn more: Food and Exercise: The Key to a Magazine Body

The different types of creatine have become the allies of athletes. This is because all of them offer the same training benefits, among which the following stand out:

The big difference between creatine compounds is their solubility. More soluble ones are absorbed faster, and their doses will need to be lower in some cases.

Contraindications of the use of creatine

One of the first things that come to mind regarding creatine consumption is possible kidney damage. You should be very careful with the supplement if you already have a kidney problem or you’re at high risk of suffering from one, especially due to excess protein.

On the other hand, you should avoid consuming creatine along with nephrotoxic drugs, meaning those that are capable of affecting kidney function. Taking both substances at the same time can increase the risk of damage.

Other contraindications to the use of creatine is related to caffeine consumption. You shouldn’t take them together, since their interaction will reduce the effect of the amino acid on the muscles.

The main differences in the types of creatine

As we explained in the article, the various types of creatine are very similar. They all have the same effects on the muscles and not enough scientific evidence states that one type is more effective than another.

The difference between these supplements is their solubility and the side effects they cause. Generally speaking, creatine monohydrate derivatives are more soluble and cause fewer stomach problems. However, you should always consult a specialist before taking them.

Tips to Improve Your Gym Performance
Now that the new year is under way, it's time to hit the gym and start making those resolutions come true! Learn how to improve your performance here. Read more »
Link copied!
Interesting Articles
Exercise and sports
3 Exercises to Strengthen Your Hip Flexors

The tips you should know if you like to run are related to training, proper running form, mental strength for…