While it may not be a miracle treatment, turmeric has been proven to help improve the condition of patients with Alzheimer's. Learn more in this article. 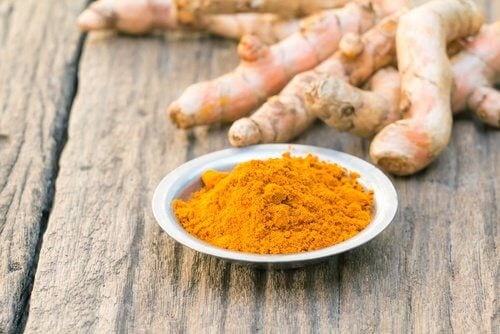 Turmeric is one of the most well-known spices with properties that can that protect your body and improve your health. In this article we’ll be looking at claims that turmeric can help Alzheimer’s sufferers.

Originally from India, its culinary and medicinal applications have spread across most of the world. Its main properties are thanks to an active agent called curcumin. This is the reason for it’s characteristic color.

First of all, turmeric has excellent anti-inflammatory and antioxidant effects that aid vital bodily functions. This helps to reduce the risk of cancer and other chronic diseases.

In fact, studies tell us that it has the ability to cross the blood brain barrier. This is a promise for the prevention and treatment of neurological diseases.

One of the most interesting findings suggests that even less than a gram of turmeric per day can be helpful.

If they take it regularly over a three-month period, it’s been shown that turmeric can help Alzheimer’s sufferers.

Read more: The Onset of Alzheimer’s: Can it Be Stopped?

Alzheimer’s disease is one of the most common forms of dementia. Patients who suffer from this disease suffer from a loss of cognitive functioning.

There are 26 million people who suffer from Alzheimer’s. It’s estimated that by the year 2050, the prevalence of the disease will quadruple. In other words, 1 in 85 people may suffer from it.

At the moment, there is no cure. Conventional medical treatments aren’t completely effective in controlling the symptoms. Because of this, many are concentrating their research on controlling its effects with natural ingredients, like turmeric.

In a study titled “Effects of turmeric on Alzheimer’s disease with behavioral and psychological symptoms of dementia” scientists examined three patients with this disease.

After receiving 100mg of turmeric every day for 12 weeks, their symptoms then improved.

According to the published information:

“All three patients exhibited irritability, agitation, anxiety, and apathy. Two patients suffer from urinary incontinence and wandering. They were prescribed turmeric powder capsules and started recovering from these symptoms without any adverse reaction in the clinical symptoms and laboratory data.”

After 3 months of analysis, the scientists concluded that both the symptoms of the patients and the burden on the caretakers were significantly reduced.

Turmeric is responsible for bringing about positive effects in Alzheimer’s patients according to a recent study that examined the relationship between this spice and Alzheimer’s disease.

This active substance increases the clearing of the pathological plaque amyloid beta. In addition, in combination with vitamin D3, its neuro-restorative properties are even better.

Here are some of the many benefits it provides:

Turmeric interferes with the appearance of more than 700 genes. It inhibits the synthesis of cyclooxygenase-2 (COX-2) and Arachidonate 5-lipoxygenase (ALOX-5), which are enzymes that modulate inflammation.

How can you include turmeric in your diet?

You can find turmeric extract and supplements in health food stores. These can vary in both the amount and quality of turmeric.

Naturally, you can add turmeric in small amounts to your normal dishes. This includes soups, stews, and rice.

In addition, you can also add it to fruit and vegetable smoothies. This gives them an extra boost of antioxidants.

However, a fast and fast and easy solution to get the most of its properties is to drink it as a tea.

Overall, taking turmeric on a regular basis is great for your health. It doesn’t only diminish the effects of Alzheimer’s in diagnosed patients. It also helps healthy people to reduce their risk of getting the disease.

That being said, even though this is a beneficial spice, you shouldn’t eat excessive amounts of it. Turmeric can help Alzheimer’s, but you shouldn’t expect miracles either. However, it’s always worth adding a great natural remedy to your diet.

5 Impressive Anti-inflammatory Remedies with Turmeric
Continue reading to learn about 5 anti-inflammatory remedies with turmeric. They each combine it with special medicinal ingredients that will enhance its effect, including coconut, cinnamon, olive oil, and black pepper. They even taste good! Read more »
Link copied!
Interesting Articles
Did you know?
New Year's Traditions Around the World