This delicious and unique honey and cinnamon banana bread has a combination of flavors and the properties of three ingredients that are very beneficial for your health. 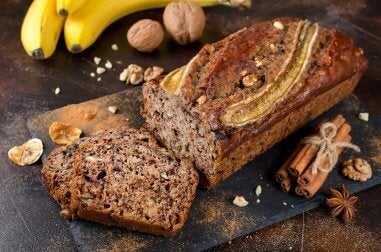 Desserts are part of our worldwide gastronomy. Also, they’re a real weakness for a lot of people. The problem is that they aren’t always healthy or recommended in a healthy diet. However, today you can find out about one that’s nutritious and simple: honey and cinnamon banana bread.

Go ahead and give this bread a try!

One of the reasons why you may feel some concern when it comes to sweet recipes is sugar. In general, people often believe desserts are bad because they have too many calories.

Usually, desserts, especially ones that are made with wheat flour or dairy products, are not necessarily a forbidden fruit.

Thus, if you are a physically active person who does regular exercise and you tend to eat all food groups, the negative effects of sugar or candy won’t make too much of a difference in your body weight. It’s important to eat a balanced diet and not to overdo the consumption of any nutrient.

However, this banana, honey and cinnamon cake recipe is considered to be low in sugar and very healthy. It’s worth paying a little attention to each of the ingredients because they’re very nutritious. Bananas are loaded with many benefits, especially a mineral in particular: potassium. Meanwhile, cinnamon and honey also provide multiple nutrients, such as vitamins A, B, and C.

Read this article, too: Benefits of a Tablespoon of Cinnamon and Honey Every Day

How to Make Honey and Cinnamon, Banana Bread

Check out this article, too: Four Desserts for Diabetics

Foods that Go Well with Honey and Cinnamon Banana Bread

Once you’ve finished making this honey and cinnamon banana bread recipe, you’ll be able to enjoy it at any time. However, it’s always good to know which things go well with this nutritious dessert, either for breakfast or as a mid-afternoon snack.

This snack is ideal for the winter or autumn. You can eat it with a nice cup of coffee along with some foamy cream. On the other hand, if you’re a tea lover, you can enjoy this delicious dessert with some iced lemon or peach tea. That way, you can enjoy the contrast between sweet and sour while you benefit from the vitamins.

Finally, it’s important not to feel guilty about eating this incredible honey and cinnamon banana bread recipe. Enjoy it!